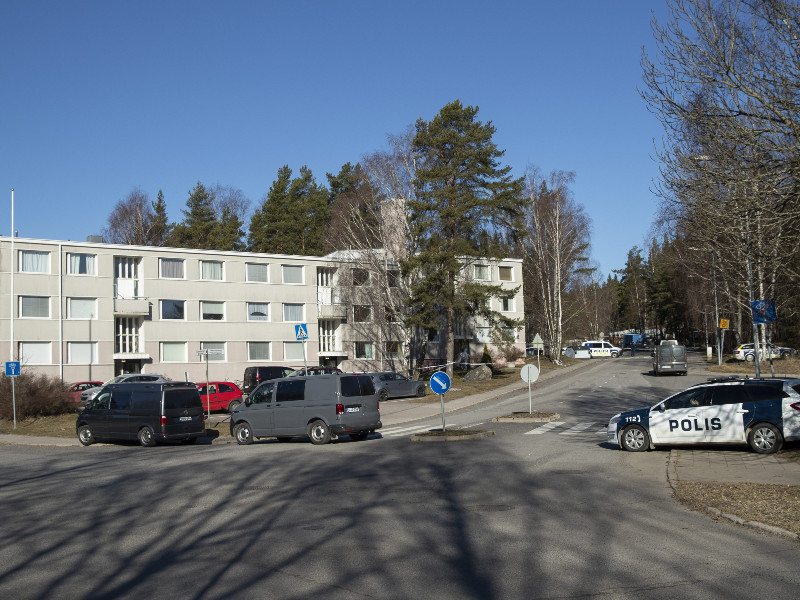 Police at the scene of a suspected double murder in Perno, a western neighbourhood of Turku, on Saturday, 3 April 2021. (Roni Lehti – Lehtikuva)

SOUTH-WESTERN FINLAND Police Department has launched a pre-trial investigation into an incident that left two people dead and one seriously injured in Perno, a western neighbourhood of Turku, on Saturday.

A 27-year-old man has been arrested on suspicion of two murders and three attempted murders in connection with the incident.

Police officers were alerted to a shooting in a private residence in the neighbourhood in the small hours of Saturday, 3 April, according to a press release from South-western Finland Police Department. The responding officers found two people dead of gunshot wounds – a 27-year-old man and 25-year-old woman – and one with stab wounds at the scene.

The injured victim, a 29-year-old man, was transported to hospital and was later reported to have suffered serious injuries but be in stable condition.

Police also discovered two other victims, a 23-year-old man and 49-year-old woman, hiding in the residence. Mika Paaer, the detective chief inspector in charge of the investigation at South-western Police Department, on Saturday said they were in good physical condition and did not require hospital care.

The suspect was arrested near the scene in possession of a firearm and edged weapon. He did not resist the arrest. At least some of the victims are believed to have known each other prior to the incident.

Paaer on Saturday revealed to Helsingin Sanomat that some of the acts took place in the residence, some in the staircase of the block of flats and some possibly in the immediate vicinity of the building.

“A firearm and edged weapon were used,” he stated, clarifying that only the suspect is believed to have used a weapon in the incident.

Paaer also revealed that the suspect has described the sequence of events meticulously to police in preliminary interrogations. “He has told about the events in a very detailed fashion, and [his account] corroborates other police evidence,” he said.

It is presently believed that the suspect was targeting the deceased man and, possibly, the other people in the flat with him. The woman who lost her life and man who was injured in the incident were apparently unknown to the assailant.

“Police information suggests they were bystanders who came to the scene of the incident. We will get more clarity on questions such as this as the investigation advances,” commented Paaer.

He added that there are “certain reasons” for investigating the killings as murders but refused to comment further on those reasons. He also underlined that the investigation is still in its early phases.

“The offences can of course be updated as police obtain more information.”

Police, he viewed, will probably request that the suspect be detained on Tuesday. The suspect is also suspected of drug offence and firearms offence in connection with the incident, according to Helsingin Sanomat.