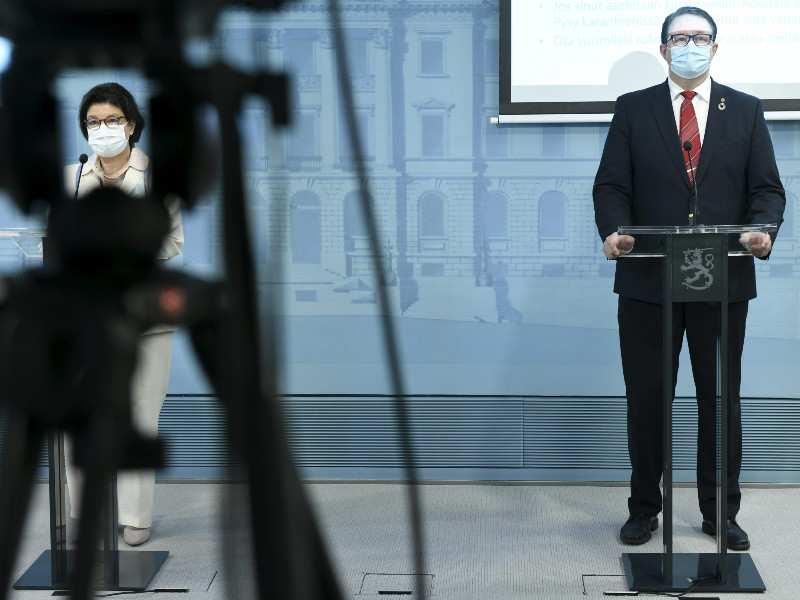 Liisa-Maria Voipio-Pulkki of the Ministry of Social Affairs and Health (left) and Mika Salminen of the Finnish Institute for Health and Welfare provided an update of the coronavirus situation in Finland in Helsinki on Thursday, 1 April 2021. (Heikki Saukkomaa – Lehtikuva)

THE NUMBER of coronavirus infections has started to decrease but remains high in all parts of Finland.

The Finnish Institute for Health and Welfare (THL) on Thursday revealed that the number of laboratory-confirmed infections has increased by 656, raising the total for the past seven days to over 4,000.

The incidence of infections in the past two weeks stood at 160 per 100,000 inhabitants.

“The good news is that the accelerating growth of the epidemic has levelled off. But that’s still a very recent development,” commented Liisa-Maria Voipio-Pulkki, the director of strategic affairs at the Ministry of Social Affairs and Health.

The number of infections has decreased slightly also in the two worst affected regions in the country: the Hospital District of Helsinki and Uusimaa (HUS) and Southwest Finland Hospital District. The incidence of infections stood at 313 and 249 per 100,000 inhabitants, respectively, in the hospital districts.

Many European countries have recently seen their infection numbers rebound after substantial declines, reminded Mika Salminen, the director of health security at THL. If Finland wants to avoid following in the same footsteps, he stressed, it must resist the urge to relax the restrictions and continue to work toward reducing the number of infections.

Relaxing the restrictions should not be considered until the decline in infections is stable and long-standing, echoed Voipio-Pulkki.

“We’re not yet in a situation [where the restrictions could be lifted] judging by the numbers presented today. We have a great opportunity to get there, but the number of infections should decrease notably and the downward trend should be very stable,” she underscored in a briefing by THL and the Ministry of Social Affairs and Health.

Salminen on Thursday also cast light on the sources recent elections. Statistics from 15 to 21 March, he told, reveal that about a half of the infections were traced back to a source within the same household. Over a quarter (28%) of infections were traced back to other sources, such as meetings with friends and relatives, trips to cottages with friends, and weddings, birthday parties and other private events.

“When people get together in larger numbers, the risk of there being someone who doesn’t know they’re transmitting the virus and causing a large chain of infection increases. These situations should be avoided as well as possible,” stated Salminen. “And maybe people are already doing this as we’re seeing this decline in case numbers.”

He viewed that the positive development is evidence of the impact of the restrictions adopted in various regions and sectors of society, such as the restaurant industry.