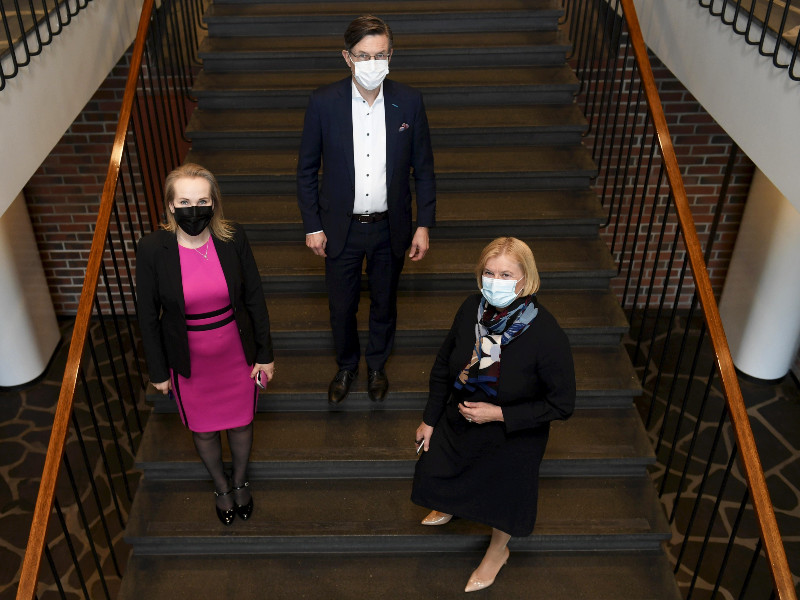 Minna Helle (left), Jaakko Hirvola and Marjo Miettinen of the Technology Industries of Finland posed for a photograph in the head office of the employer organisation in Helsinki on 25 March 2021. (Vesa Moilanen – Lehtikuva)

THE TECHNOLOGY INDUSTRIES of Finland on Thursday announced its decision to withdraw partly from collective bargaining and establish a negotiating organisation for companies that want to continue ironing out the terms and conditions of employment with trade unions also in the future.

The objective of the decision, it said, is to transition as widely as possible to agreeing on the terms and conditions at workplaces.

Marjo Miettinen, the board chairperson at the Technology Industries of Finland, on Thursday revealed in a press conference that a decision on the issue was made on Wednesday. “Tailor-made solutions are necessary also that companies, even those competing in global markets, can succeed and employ people,” she stated.

She underscored that the objective is by no means to erode the terms and conditions of employment: “We want companies and employees to do well in Finland. We want Finland to to well, too.”

Representatives of the interest group declined to speculate on which and what type of companies could be interested in transitioning to non-centralised bargaining.

Jaakko Hirvola, the chief executive of the Technology Industries of Finland, reminded that there are major differences between both the member companies and their needs. Some, he revealed, have opted not to join the interest group specifically because of trade union representation.

“We’re now waiting for announcements on what approach companies will take. We encourage companies to discuss the matter with their personnel and shop stewards,” he said. “After August, we’ll be promoting these two approaches equally. There’s solid support for both approaches, and that’s why we wanted to incorporate that into [the strategic decision].”

Hirvola also said an advance notice of the decision had been issued to both ministries and the Central Organisation of Finnish Trade Unions (SAK).

The Technology Industries of Finland is one of the largest labour market operators in the country: its roughly 1,600 member companies account for 50 per cent of exports and 70 per cent of research and development investments, as well as directly employ almost 315,000 people.

Its decision signals the continuation of what appears to be the gradual and inevitable erosion of the centralised system of bargaining in Finland. Finnish Forest Industries in October announced it will pull out from collective bargaining agreements in order to start agreeing on the terms and conditions of employment exclusively between employees and employers.

Trade unions have voiced their vehement disapproval of the decision.

Päivi Niemi-Laine, the chairperson of the Trade Union of the Public and Welfare Sectors (JHL), predicted that the next round of collective bargaining negotiations will be “stormy”.

“We can’t stand idly by if employers try to dupe Finnish employees to the poverty line during next autumn’s round of negotiations. The most important duty of trade unions is to defend the terms and conditions of employment – if necessary, with tough measures,” she declared to Helsingin Sanomat.

Jarkko Eloranta, the chairperson at SAK, accused the Technology Industries of Finland of seeking to erode the bargaining system and do away with the universally binding nature of collective bargaining agreements.

“Industry-specific bargaining agreements are specifically what form the foundation of labour market bargaining. They create stability and predictability for wage earners and companies.”