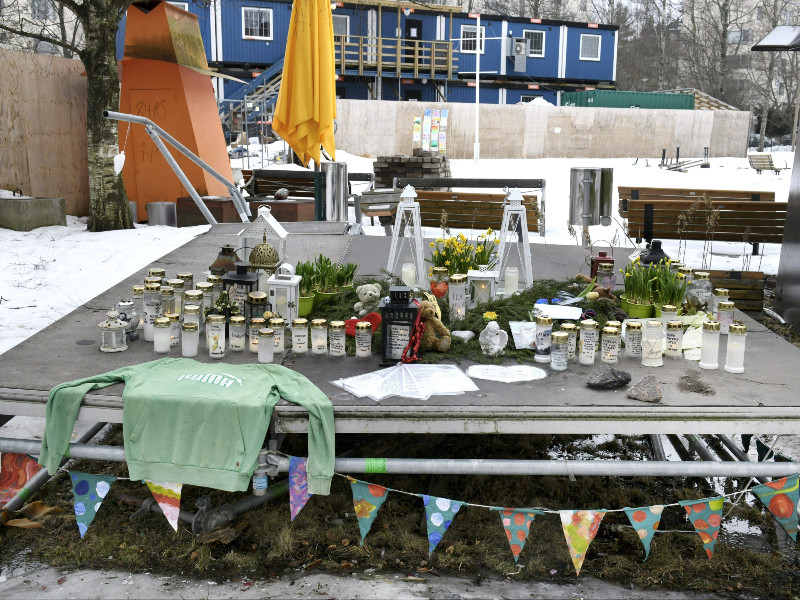 Candles and other tributes at the scene of the homicide on 24 March 2021. (Heikki Saukkomaa – Lehtikuva)

THE DISTRICT COURT of Helsinki on Wednesday delivered an interlocutory judgement in the case of a 16-year-old boy who was killed in Koskela, a northern neighbourhood of the Finnish capital, in December.

The court ordered all three suspects to remain in detention and undergo a psychological examination, citing both the nature of the act and the young age of the suspects.

The prosecution is demanding that the suspects, all of whom were born in 2004, be sentenced to prison terms ranging from nine to 12 years, for murder. Prosecutor Yrjö Reenilä on Wednesday said to Helsingin Sanomat the decision was expected, as the psychological examinations had been requested by the prosecution.

“It was in a way expected because we’d asked that a mental examination be ordered and none of the defendants had objected,” he said.

The prosecution has argued that the teenage defendants subjected the victim to “brutal and humiliating” acts of violence for several hours after getting together to celebrate the birthday of one of the defendants. The defendants have all denied the murder charges but admitted to most of the violent acts described in the indictment.

The objective of the psychological examination is fundamentally to determine whether the defendants understood the gravity and potential consequences of their actions.

The District Court of Helsinki did not comment on the culpability, intent or sentencing of the defendants, but it viewed in its interlocutory judgement that two of the defendants had obviously subjected the victim to violence by hitting and kicking him repeatedly. The third defendant had hit the victim twice in the face and participated in moving him.

One of the defendants had also hit the victim with a metal pipe and twice landed his body on top of the victim.

The prosecution has also brought charges of robbery, incitement to robbery and nine counts of assault in the case. Accused of the robbery is also a fourth person who was not involved in the homicide in any way.