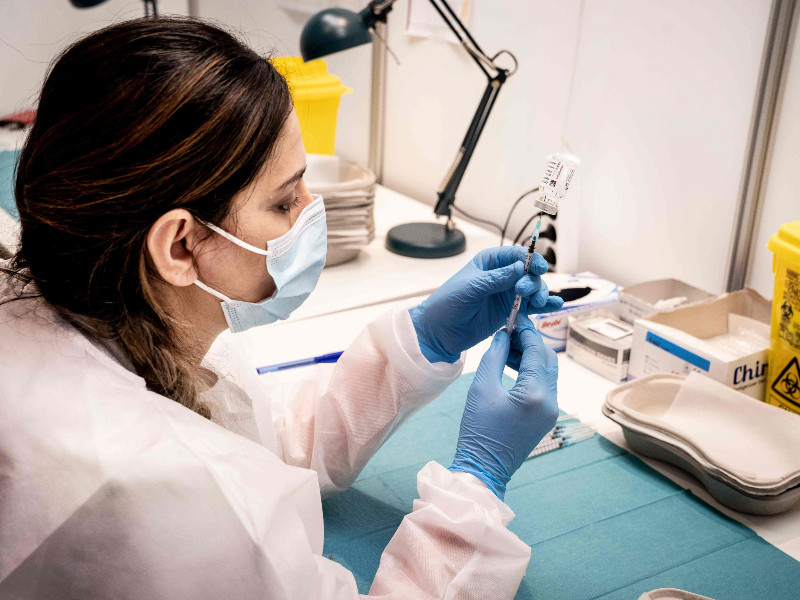 A dose of AstraZeneca’s Covid-19 vaccine was drawn into a syringe in Copenhagen, Denmark, on 11 February 2021. (Liselotte Sabroe – AFP/Lehtikuva)

THE FINNISH INSTITUTE for Health and Welfare (THL) on Friday announced it has decided to temporarily suspend using the coronavirus vaccine developed by AstraZeneca.

The at least seven-day suspension, it stated, is a precautionary measure taken in response to an investigation into a possible link between the vaccine and two reported cases of cerebral venous sinus thrombosis in Finland.

The reported coagulation disorders are extremely rare, according to a press release from THL. There is additionally no confirmation on any link between them and the vaccine.

The Finnish Medicines Agency (Fimea) on Friday said the problems were reported 4–10 days after receiving an injection of the vaccine. Both of the patients, it added, have medical risk factors that make them susceptible to blood clots.

Hanna Nohynek, a chief physician at THL, added in a press conference that the risk factors for blood clots include overweight, birth-control pills, fatty-acid metabolism disorders and certain medications.

“This is truly a very regrettable situation,” said Taneli Puumalainen, the head of infectious diseases control at THL. “The coronavirus vaccination campaign has progressed well so far. The vaccinations have already reduced deaths among the elderly and infections in elderly people in nursing homes, for instance. Overall we’ve felt very positive about how the vaccinations are going and how we’ll be able to reduce the epidemic’s impact on society as we edge closer to summer.”

Puumalainen viewed that the cases are no reason for concern, as about 140,000 people in Finland have received a jab of the vaccine developed by AstraZeneca.

“I wouldn’t be too concerned about this very low risk. But of course if you experience any sort of serious symptoms after getting vaccinated, you should contact a health care specialist,” he underlined.

People are also advised to seek medical attention immediately if they develop a strong, sustained and worsening headache or visibly increasing bruising on skin or mucous membrane.

Mia Kontio, a chief specialist at THL, on Friday assured that the suspension should not prolong the vaccination campaign significantly.

“It doesn’t mean too much. Of course it’d be important to be able to distribute the vaccine doses, but we’ve only received small amounts of AstraZeneca and will only receive a small amount next week. Even if this prolonged for another week, it wouldn’t mean a lot in terms of numbers,” she was quoted as saying by Helsingin Sanomat.