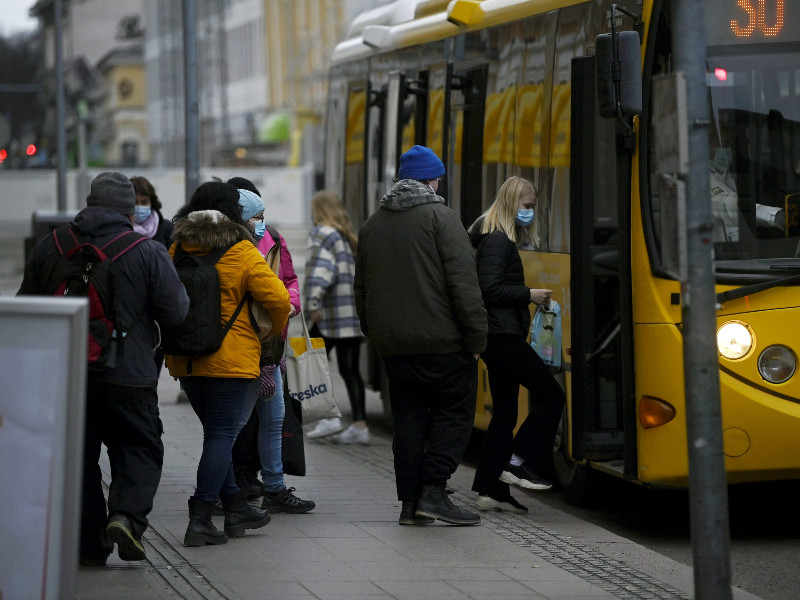 The City of Turku has instituted a face mask mandate for public transport users on Monday, 15 March 2021. (Antti Aimo-Koivisto – Lehtikuva)

A LARGE CHAIN of coronavirus infections has been detected among exchange students in Turku, South-west Finland.

YLE on Thursday revealed that as many as 71 people have already test positive for the virus, with each of them exposing an estimated 20–30 people to it. The British variant of the virus is believed to be behind what is one of the largest clusters of infections detected in the 190,000-resident coastal city.

The variant spread from one person to another at private parties and in student dormitories, for example.

Mikko Pietilä, the chief medical officer at the Hospital District of South-west Finland, on Thursday estimated that the number of infections may soar to several hundreds due to the high number of exposed people.

“This is the most serious infection cluster we’ve encountered in Turku. The situation is very serious. I’ve requested that a minister look into whether some restrictions on movement could be introduced in some areas of Turku,” he revealed.

Jutta Peltoniemi, the chief physician of infectious diseases at the City of Turku, said the severity of the situation became clear on Wednesday.

“The infections and exposures have taken place widely in, for example,  shared student housing, where the virus spreads easily,” she said, confirming that local authorities are continuing to trace the contacts of the infected people.

Several infections have been detected in some housing units in Turku Student Village. People have also been exposed to the virus at least in Old Irish Pub on 3 February, Espresso House on 7 March, Educarium Gym on 11 March and the sauna of Student House on 11 March.

Mayor of Turku Minna Arve (NCP) on Thursday stated in a press conference that the city has asked law enforcement officials for assistance in monitoring quarantines. “I’m also asking every resident to avoid needless movement especially in the areas of Student Village and Varissuo, for example.”

The Southwestern Finland Police Department has confirmed that it has received reports of private events that violate the restrictions on gatherings.

“Unfortunately we’ve had several reports of house parties being organised and large groups of people getting together in small spaces,” said Stephan Sundqvist, a superintendent at Southwestern Finland Police Department.