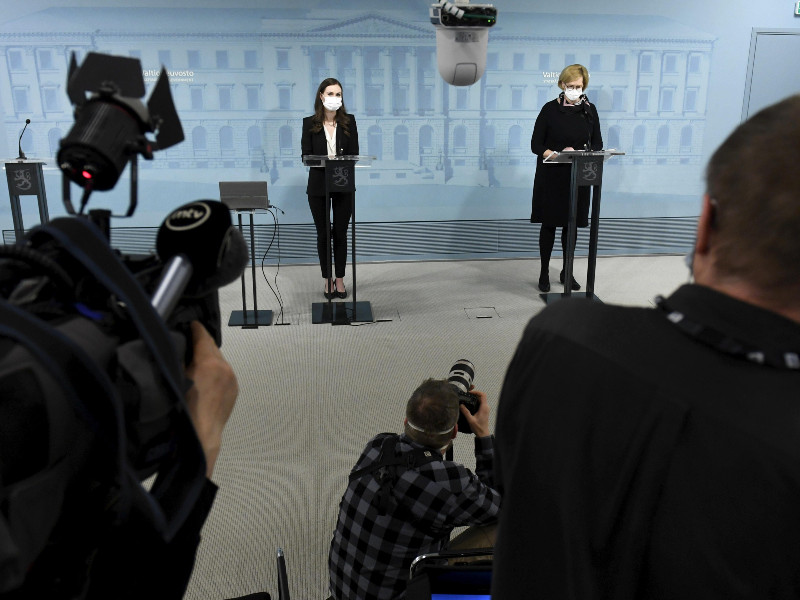 Prime Minister Sanna Marin (SDP) and Minister of Employment Tuula Haatainen talked to the media about the state of emergency and temporary shutdowns of restaurants at the Government Palace in Helsinki on Monday, 1 March 2021. (Vesa Moilanen – Lehtikuva)

THE CONSTITUTIONAL LAW Committee of the Parliament on Wednesday approved a proposal to amend the legislation on restaurant and accommodation services in a way that enables the government to shutter restaurants to slow down the spread of the new coronavirus in Finland.

The committee also reproached the government for declaring a state of emergency to amend the law, pointing out that it was unnecessary to apply section 23 of the constitution per the proposal.

The section lays down basic rights and liberties in situations of emergency, the existence of which is determined not by the government but by the Parliament. The Parliament, similarly, is the institution exercising ultimate legislative power and thus makes the decision on whether to shut down restaurants in situations of emergency, according to the Constitutional Law Committee.

“When it is not a question of delegating regulatory power to the government under, for example, the emergency powers act, there is no judicial need or justification for declaring a separate state of emergency with the support of the president of the republic from the viewpoint of presenting this proposal,” the committee said.

It additionally noted that sections 106 and 107 of the emergency powers act cannot be adopted without government decrees approved by the Parliament.

Prime Minister Sanna Marin (SDP) on Tuesday assured to YLE that the seemingly disorganised actions by the government in recent days were not an attempt to horde power but to protect the health and lives of people in Finland.

“We’re taking action to keep the coronavirus situation under control,” she stated on YLE’s A-studio.

“We also want to take action lawfully, and that’s why these things will be examined thoroughly before any sections of the [emergency powers] act are adopted – even to a [limited] applicable extent.”

Marin added that it is the intent of the government to institute a three-week shutdown in order to alleviate the coronavirus epidemic and reverse the steep upward trend in new infections.

“The situation is serious. We have an authority, meaning the Regional State Administrative Agency [for Southern Finland], that has interpreted the law differently when it comes to closing facilities. Now the Ministry of Social Affairs and Health is evaluating if the law should be specified. My personal view is that we should submit a specifying proposal to the Parliament.”

She pleaded with the public to contribute to the effort to prevent the epidemic from accelerating by showing restraint for the next three weeks.

“I’m pleading with people for the next three weeks: even if some facilities are open, let’s not go to to places where we run into other people. We should avoid all contacts,” she said to the public broadcaster.

The government shelved its plan to implement sections 106 and 107 of the emergency powers act on Sunday. Marin on Tuesday confirmed that the government is working on the necessary decrees but also reiterated that the judicial analyses presented to the government indicate that the sections contain clauses that could be implemented also with the framework of regular legislation.

“For example, it has been viewed in issues linked to coordinating communications that [the clauses] could be adopted before invoking the powers that require a government decree,” she said.