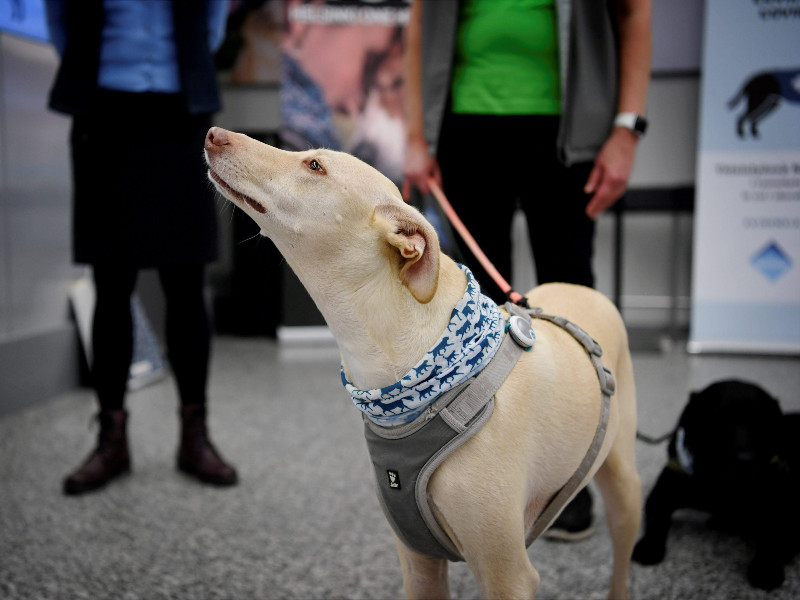 FINNISH CUSTOMS will not be utilising dogs in its effort to prevent the spread of the new coronavirus, despite training the dogs and making other preparations for months, reports Helsingin Sanomat.

The reason for this, the newspaper wrote, is that a clause on the use of dogs in such applications was left out of the newly amended act on communicable diseases at the last minute.

The Ministry of Social Affairs and Health made the decision on grounds that there is not sufficient evidence of the ability of dogs to detect coronavirus carriers, according to ministerial counsellor Anni Virolainen-Julkunen.

“There isn’t enough evidence that dogs can detect Covid-19,” she said to Helsingin Sanomat on Monday.

Officials were also concerned that the sniffer dogs could cause a false sense of security, as passengers not marked by a dog upon their arrival could assume the are not carrying the coronavirus.

A decision to train dogs to sniff out coronavirus infections was made almost a year ago, with the training starting with two dogs in November. The plan was that the dogs would be ready to start sniffing passengers at border-crossing points when the amended act on communicable diseases is adopted, in late February.

They would not have been used to verify the infections but simply to help officials to detect passengers potentially infected by the virus, thus reducing the need for mandatory testing.

“When you’re talking about millions of passengers, anything that’s an improvement over making guesses would take the process in the right direction,” said Mikko Grönberg, an enforcement director at Finnish Customs. “The dogs would’ve been part of the process of referring passengers to tests as a procedure similar to a filled-out form or mobile app.”

Grönberg told Helsingin Sanomat that dogs trained for the duty completed a total of 400 exercises, indicating that they were able to detect a positive with a roughly 90-per-cent certainty

The act on communicable diseases not enabling the use of dogs in the prevention of generally hazardous diseases has prompted questions at Finnish Customs.

“We don’t understand why you wouldn’t make it possible to use dogs as part of official activity to fight a pandemic,” Hannu Mäkinen, the director general of Finnish Customs, stated to Helsingin Sanomat.

“It was never a question of replacing medical measures but rather supporting them whenever beneficial.”