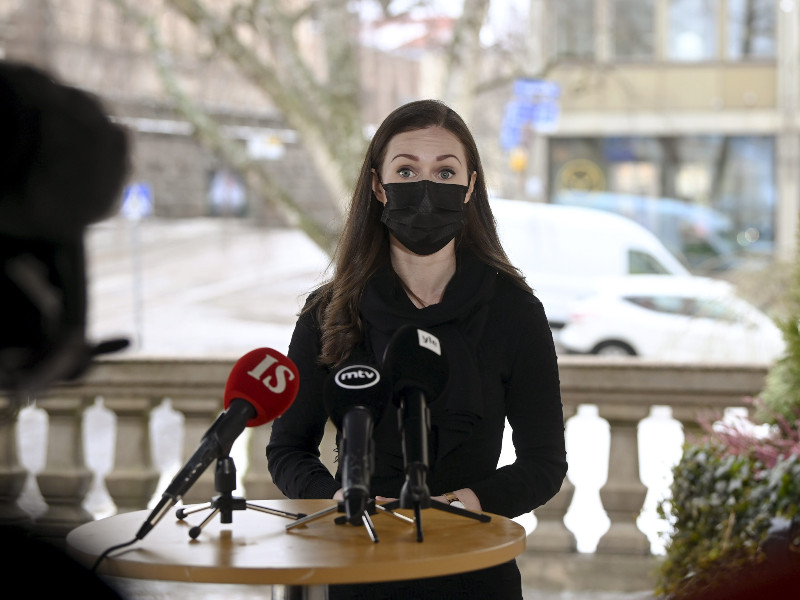 Prime Minister Sanna Marin (SDP) shed light on the conclusions drawn by the government about the coronavirus epidemic outside the House of the Estates in Helsinki on Thursday, 25 February 2021. (Antti Aimo-Koivisto – Lehtikuva)

THE GOVERNMENT of Prime Minister Sanna Marin (SDP) on Thursday announced Finland will institute a three-week shutdown as of 8 March 2021.

Areas in the acceleration or community transmission stage of the coronavirus epidemic will thereby transition to remote teaching for pupils in the last three years of basic education and upper-secondary education, and suspend leisure activities for over 12-year-olds until 28 March.

The Finnish government said it will next week present a proposal for shuttering bars, pubs, restaurants and nightclubs in areas in the acceleration or community transmission stage of the epidemic for the three-week period. The establishments, it added, would remain subject to restrictions on maximum capacity and opening hours also after the shutdown.

Marin assured that the establishments would be compensated for the financial losses caused by the shutdown, under a scheme that is being drafted at the Ministry of Employment and the Economy.

The tier-two restrictions, for example, limit gatherings of all types to six people.

Municipalities in such areas are additionally required to step up their efforts to monitor compliance with quarantine orders and make use of the powers granted under the newly amended act on communicable diseases. The act enables regional authorities to, for example, temporarily shutter private spaces.

“You could call this operation final spurt,” characterised Minister of the Interior Maria Ohisalo (Greens), “which we’re using to accelerate toward brighter times.”

The government stated yesterday that it remains prepared to declare a state of emergency over the coronavirus epidemic next week. The emergency powers act, which enables it to limit numerous basic rights, will not be invoked at this time, however.

“We won’t be instituting a curfew, for example,” said Minister of Justice Anna-Maja Henriksson (SFP).

The government and president declared a stage of emergency over the epidemic on 16 March 2020, imposing sweeping restrictions on the daily lives of people in Finland. In-person instruction was suspended at all levels of education, public spaces and hobby facilities were shut down, a broad-based teleworking recommendation was introduced, and public gatherings were limited to 10 people.

Invoking the emergency powers also enabled the government to disregard provisions in the annual holidays act and working hours act in regards to critical health care professionals. The government also announced a lockdown of Uusimaa, the most populous region of Finland, on 27 March.

The lockdown was lifted on 14 April, whereas the other restrictions were lifted gradually during the course of May. In June, it was determined that the epidemic can be managed with regular powers and that the state of emergency has been lifted.