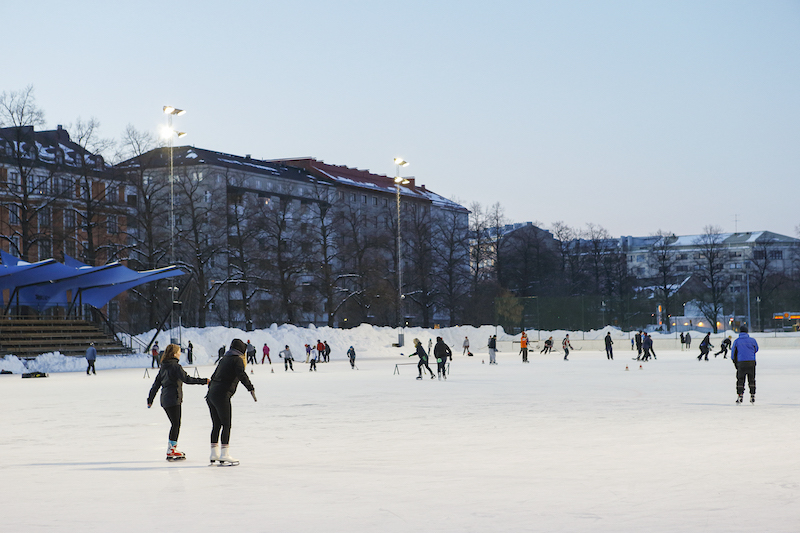 As a result of the restrictions due to the coronavirus, the visitor numbers at sports facilities dropped by 20 per cent, approximately. Despite this, they still welcomed over eight million visitors last year. In particular, the importance of outdoor sports facilities to residents was emphasised.

For example, beaches had 200,000 more visitors than the previous year. There are three new artificial ice rinks, and for the first time, using them is free of charge. For example, in December almost 20,000 visitors were counted at Brahenkenttä ice rink, which is twice the number of visitors in an average month.

The closing of the indoor sports facilities moved some of the sports services online, onto channels such as Helsinki-kanava. The Sports Services created the Jumppahetki programme together with YLE. In the spring, it had 300,000 TV viewers in a week at its peak, as well as 800,000 views on Yle Areena.

According to a survey carried out in the autumn, Helsinki residents were particularly pleased with the City’s outdoor activity areas and parks, as well as jogging tracks and trails.

Online visits to the library increased by three million

During the coronavirus pandemic, people have learned how to read magazines online and books on a screen. The Helmet libraries’ online services saw 15.9 million visits last year, which is three million visits more than the previous year.

Physical visits to the library decreased by 42 per cent, since the libraries were closed for almost two months in the spring due to the coronavirus, and for a long time, the services were limited to quick visits. Helsinki libraries were visited 5.2 million times last year. In 2019, there were nine million visits.

The visitor numbers of Helsinki Central Library Oodi decreased by 60 per cent due to the coronavirus restrictions. Still, 1.2 million visits were logged for the library last year. The peak year 2019 was also Oodi’s first full operating year, and the building was also visited by a substantial number of tourists then. In 2019, there were 3.1 million visitors.

The new location of Herttoniemi library is a great success

Herttoniemi Library, which moved to new facilities in Local Service Centre Hertsi along with the youth centre in March, increased its number of visitors by 51 per cent, despite all the restrictions.

The shared opening ceremony of Herttoniemi library and youth centre planned for March had to be cancelled, and the opening of the much-awaited facilities was postponed by over two months due to the coronavirus restrictions. Still, this library next to Herttoniemi metro station was visited 112,000 times in 2020.

Youth work moved to the internet and the streets

When youth centres had to be closed in the spring, youth work smoothly transitioned into a digital form. Young people were engaged by holding game nights and battles online. They were also encouraged to chat with the instructors on Discord and WhatsApp, among other services.

The Helsinki youth workers went to where the young people were spending their time during these exceptional times: streets and shopping centres. For example, at the end of the school year, about 80 youth work professionals and a group of experienced volunteers were mobilised to visit young people after digital end-of-term celebrations.

The six cultural centres of the City of Helsinki and the Savoy Theatre had to close their doors for several months, and for some parts of the year, ticket sales were limited to 30–50 per cent of the normal capacity. Despite this, they managed to hold over 3,000 events taking into account the precautions related to the coronavirus, and more than 400,000 visitors attended these events. The number of visitors was less than half of the 900,000 visitors in 2019.

During an exceptional year, cultural centres also expanded their virtual offering. Helsinki residents had the opportunity to take part in cooking with wild herbs, circus courses and urban dances. The wide variety of performances hosted by the cultural centres reached nearly 150,000 views. In addition to this, the Savoy Theatre’s virtual Christmas concert was seen by 500,000 viewers across various channels.

The exceptional times inspired creativity. When traditional celebrations could not be held, the City of Helsinki organised the most wonderful May Day celebration of all time to be enjoyed at home. During the winter holidays, the City delivered surprising art gifts to those in isolation or at work. Helsinki Helpline was a significant help to residents aged over 70.

The total number of visitors to the museums of the Helsinki City Museum family was only about a third of record numbers due to museum closures and event cancellations.

In 2020, the City Museum focused on online content. Museum websites and social media channels featured content that anyone could enjoy at any time.

More than 1,400 works of art were uploaded to the Finna search service. Prior to this, these works could only be seen inside the museum walls. Helsinki City Museum also published 65,000 photos from the 1840s onwards on the Helsinkikuvia.fi service. Both services are increasingly popular. For example, the art collection on Finna was viewed only 5,550 times in 2019 and as many as 66,000 times in 2020.

HAM offering as many as 14 exhibitions

HAM Helsinki Art Museum’s work with audiences was marked by a fast transition to digital services. Open guided tours, viewpoint interviews and workshop videos on Instagram and Helsinki-kanava were introduced in 2020 as new forms of service.

Exhibitions and other events attracted a total of 84,000 visitors to Tennis Palace in 2020. The previous year saw 190,000 visitors. Despite challenges posed by the coronavirus pandemic, all 14 of the planned exhibitions were realised. Only the modern art event Helsinki Biennale at Vallisaari was postponed until summer 2021.