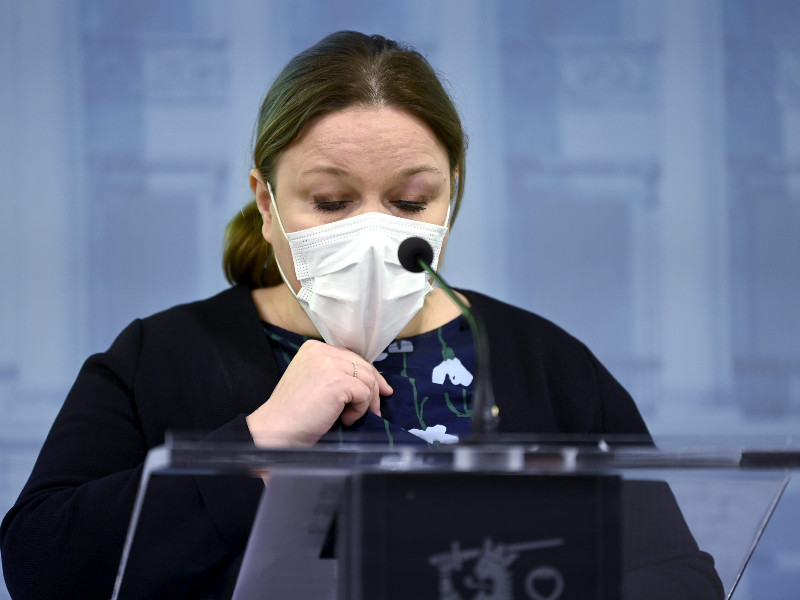 Minister of Family Affairs and Social Services Krista Kiuru (SDP) adjusted her mask at a press conference on amending the act on communicable diseases to improve health security at borders in Helsinki on Friday, 19 February 2021. (Emmi Korhonen – Lehtikuva)

THE GOVERNMENT of Prime Minister Sanna Marin (SDP) has submitted a bill that would enable regional authorities to introduce mandatory tests at borders and, for example, construction sites, reports Helsingin Sanomat.

Minister of Family Affairs and Social Services Krista Kiuru (SDP) on Friday confirmed that the government is intent on ensuring everyone arriving in the country is tested for the new coronavirus.

“The measures that we’ve already decided on are no longer enough to fight this new threat,” she commented, referring to the emergence of more transmissible variants of the virus, at a press conference held by the Ministry of Social Affairs and Health.

“We’re in a very difficult situation, where Finns once again have to demonstrate their resilience in the face of a difficult coronavirus situation.”

The bill would effectively enable health care professionals to order groups of people to a mandatory health check, which could entail a coronavirus test, if they have been in a locality, workplace or a facility, or on a ship or aircraft where infections are suspected. It identifies airports, harbours, construction sites and educational institutes as examples of environments where such an order could be issued.

Kiuru on Friday said the Regional State Administrative Agencies (AVI) should all apply the decisions in the same way in order to ensure equality.

The agencies are presently able to order people to a mandatory health check in the event of a dangerous communicable disease, but the legislation and regulations have been interpreted in such a way that does not allow the issue of such orders to large groups of people.

Helsingin Sanomat wrote that the goal is to implement the bill in early April. As the bill is an attempt to specify the legislation, the agencies are already able to take advantage of the decision, according to Kiuru.

“Now it’s important that the new tools will be adopted quickly, if allowed by the Parliament. People in the field will in the meantime roll up their sleeves while we wait for the specifying legislation.”

A person refusing to take the health check could in theory be committing a health protection violation, which carries the penalty of a fine or up to three months in prison.

YLE on Monday reported that quarantine orders have been issued to all the roughly 800 people employed at Rauma Shipyard in Southwest Finland. About 160 people employed at the shipyard had already been ordered into quarantine, while 240 had tested positive for the coronavirus and been isolated from the others.

None of the infected people are currently in need of hospital care, according to the public broadcasting company.