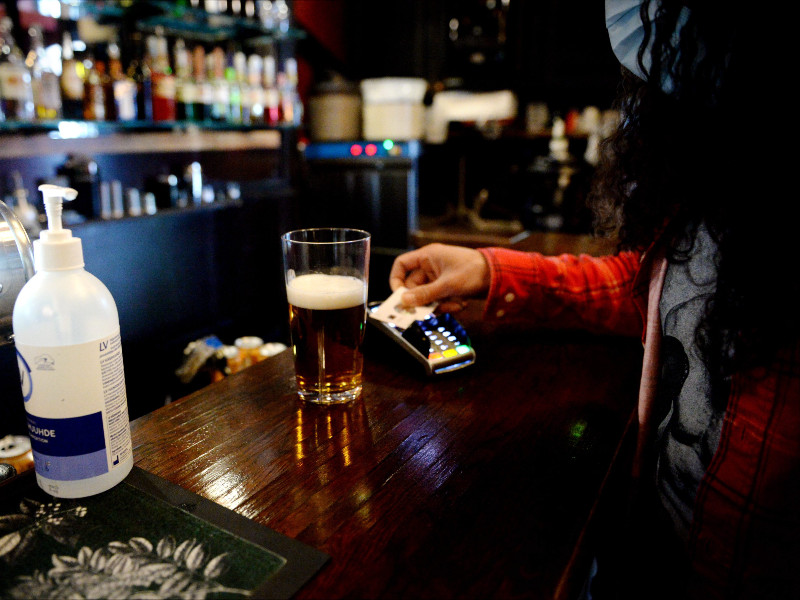 A customer at the counter of a bar in downtown Helsinki on 21 November 2021. (Mikko Stig – Lehtikuva)

THE FINNISH Hospitality Association (Mara) has shot down the recommendations issued on Thursday by the Finnish Institute for Health and Welfare (THL).

Mara on Thursday argued that the recommendation to shutter bars, pubs and nightclubs for three weeks in the capital region is not only unwarranted in light of the number of infections originating in such establishments, but also impossible to implement with the powers granted under the communicable diseases act.

“There’s no way you can justify these kinds of measures with the charts presented by THL. The fact is still that relatively few infections have started from restaurants and the ones that did started from a couple of nightclubs. The current legislation already allows authorities to shut down companies for up to a month if they operate irresponsibly.”

Also THL should be well aware of the legislative limitations associated with its recommendations, according to Lappi.

“The ways in which restaurant operations can be limited have been defined strictly at the behest of the Constitutional Law Committee. It’s really confusing that an authority proposes a thing that can’t be accomplished by authorities. I have no understanding for their statement,” he declared.

THL also recommended, on the eve of the winter holiday season, that residents of the capital region avoid travel to other parts of the country for a month. Lappi estimated that also this recommendation is unwarranted as long as people comply with the instructions and behave responsibly.

Helsingin Sanomat wrote yesterday that accommodation service providers in northern parts of the country are preparing to welcome high numbers of holidaymakers in the coming weeks. Holiday cottages, especially, have been practically fully booked booked as of next week.

Yrjötapio Kivisaari, the CEO of Visit Levi, told the newspaper that tourism operators are not expecting a flood of cancellations unless the recommendation becomes an order. Local tourism operators, he said, have no choice but to adhere to the instructions provided by Lapland Hospital District.

“We’re doing our utmost so that the coronavirus can’t spread,” he stressed.

The recommendation to avoid travel during the holiday season came practically at the worst possible time, estimated Janne-Juhani Haarma, the CEO of Visit Ylläs. “Bookings typically have a 28–30-day cancellation policy, meaning the money won’t be refunded after that,” he said to Helsingin Sanomat.

His assessment was echoed by Juha-Pekka Olkkola, the managing director of Lomarengas: The recommendation to skip holiday trips came a bit late, as people are already on the way.”

Olkkola also stated that he is confident people have the awareness to enjoy their holidays safely and spend their time on sports and other activities instead of partying.