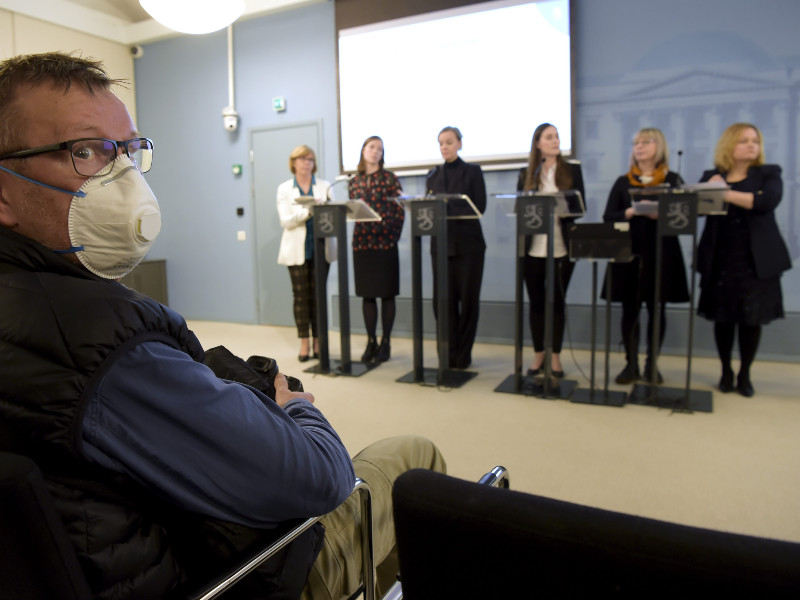 A photojournalist wore a mask as the Finnish government detailed new measures to fight the coronavirus outbreak in Helsinki on 16 March 2020. (Antti Aimo-Koivisto – Lehtikuva)

THE PREPAREDNESS to combat a crisis such as the coronavirus epidemic was not at a particularly high level last spring in Finland, reveals a qualitative study carried out by Deloitte.

The London-based professional services provider interviewed a total of policy makers and central government officials for the study, finding that experiences from earlier drills could only be applied to the coronavirus-induced crisis to a limited extent.

The 47 interviewees were asked to anonymously share their experiences of crisis management and the use of emergency powers from the period between early January and late June 2020.

The study found that organising the effort to combat a crisis such as the coronavirus epidemic should be quicker than last spring and that ministries should both update and practise their preparedness strategies. It also identified a need for clearer management and organisational procedures that can be applied to various crises without major structural revisions.

For example, the roles of the coronavirus coordination group and operational centre were unclear.

The Ministry of Social Affairs and Health assumed too large a role in terms of leadership during the crisis, according to the interviewees. The effort, they gauged, should have been led and powers wielded more through the office of the prime minister.

Room for improvement was found also in cross-sectoral co-operation, the co-operation between the central government, industry and other authorities, and international co-operation – especially within the European Union.

Both policy-makers and government officials acknowledged that, in spite of the criticism, the crisis management effort and its results were generally successful: the decision-making was quick and principally timely, and the decisions were largely made collaboratively despite the different priorities of various administrative sectors.

The decision to invoke the emergency powers act was similarly deemed timely, even if some interviewees estimated that measures such as school closures were unnecessary.

The inclusion of all administrative sectors, on the other hand, also slowed down decision making. Some also viewed that the government was at times overly concerned about operational details instead of the overall strategy.

The interviewees identified public communication as one of the main successes of last spring, with many viewing that it had an important role in managing the epidemic – in spite of the confusion about the differences between instructions, recommendations and orders.