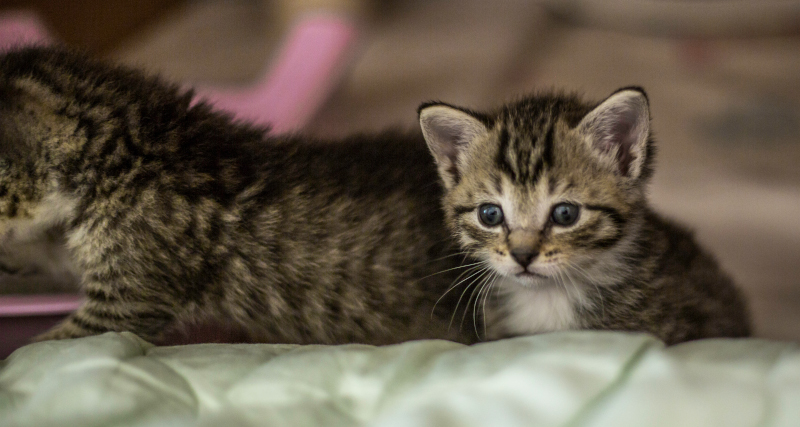 A kitten for adoption at HESY

Welfare benefits and a functioning democracy might earn Finland the title of “happiest country in the world” many times over, but for the tens of thousands of pets abandoned here every year, the future is bleak.

Figures indicate that a shocking number of Finns have been cruelly discarding their pets, leaving them to the mercy of the streets.

The country is currently witnessing what many have dubbed a “cat crisis.” According to estimates by the Finnish Federation for the Animal Welfare Associations, at least 20,000 pet cats are abandoned every year.

Left to their own devices, the animals often turn feral. Many don’t survive the harsh winter and succumb to cold or starvation. Only a tenth of abandoned cats end up reunited with their owners.

Animal shelters and kennels now fear that Finland is on the precipice of a similar crisis with dogs, as thousands are cast aside by their owners every year.

Fortunately, multiple organisations in the country are working towards remedying the situation and have taken on the task of providing new homes for abandoned pets.

Helsinki Humane Society HESY (The Helsinki Society for Animal Protection) is a 146-year-old animal rescue organisation that was founded by writer Zacharius Topelius on 25 November 1874.

Animals found in these areas are kept at the Viikki animal shelter for 15 days. If the owner does not contact the shelter within the specified period, the animal is transferred to HESY’s own no-kill animal shelter.

At the HESY centre, the animals are examined by a vet, following which they are vaccinated, dewormed, neutered and given an identifying microchip. After staying in the isolation unit for a month (to ensure health and safety) they are taken to the animal premises to be put up for adoption.

In addition to homeless animals, HESY also assumes responsibility for animals that have been mistreated or whose owners are unable to take care of them.

In the last 20 years, the organisation has taken in and found new homes for approximately 30,000 homeless animals.

You can find more information about HESY here.

Rekku Rescue ry is a Finnish animal rescue association founded in 2002. Its primary focus is providing aid to homeless cats and dogs in Finland.

The organisation carries out preventive animal protection work to reduce the number of strays in the country. In addition to finding homes for animals, Rekku Rescue regularly arranges sterilising campaigns and events with local veterinarians.

The association’s goal is to help animals in a sustainable way. It strives to find homes which provide pets with the care they need and deserve.

Rekku Rescue does not have an adoption centre or shelter, as all the animals in its care stay in foster homes. As per the organisation’s policy, it only allows people above the age of 20 to adopt a pet.

Adequate knowledge and experience is expected from those adopting certain breeds of dog. The organisation also cautions against letting adopted cats loose into the street.

Rekku Rescue urges people to adopt a pet only after serious deliberation, especially in the case of rescues, as these animals would suffer greatly if they are rehomed.

You can find more information about pets up for adoption at Rekku Rescue here and here.

Darian Vorlick, a community manager based in Helsinki, shares his experience adopting rescue pets in Finland. Vorlick has taken in three cats in total, and currently has an adult cat from HESY and a kitten from Rekku Rescue.

“The adoption process for both cats was slightly different,” he says. “HESY was an actual animal shelter, whereas Rekku operated through a series of foster homes around the Helsinki area.”

In the case of HESY, Vorlick’s family visited the shelter to select a cat from those that were up for adoption. Most of these were already adults. “Our cat was rescued from a cat hoarder and had zero to minimal human interaction, so he was largely feral when we adopted him,” Vorlick reveals.

Once the family chose a cat, there was a 7-day waiting period, which served as an opportunity to prepare their household for the new member as well as a cooldown period to ensure they did not make a hasty decision. Following this, they were able to pay the adoption fees and bring the cat home.

Adopting a pet from Rekku Rescue involved an interview process. The Vorlicks had to submit an online application stating why they wanted a cat, how much experience they had raising the animals, what kind of household the pet would be joining and so on.

“Once the agency approved the application, it was up to us to contact the foster family and arrange a visit at their home to meet the prospective cat,” clarifies Vorlick. “If we decided that the kitty was the right one for us, we contacted Rekku to begin the adoption paperwork. Once the adoption fee was paid, we would coordinate with the foster family to determine when would be a good time to pick up and bring home the kitty.”

Both HESY and Rekku Rescue ensured that the cats were neutered/sterilised, chipped and given the requisite vaccinations, eliminating the need for any follow-up veterinary visits once the animals were adopted.

“Each of the agencies was great to work with as it was very clear they cared for the animals and wanted to make sure they were going to good homes,” Vorlick affirms.

The ongoing pandemic has also had an impact on animal adoption in the city. While HESY’s animal premises are currently shut as a safety precaution, the organisation continues to conduct operations remotely.

“HESY has received a lot of animal adoption forms because of the COVID-19 pandemic,” reveals Erja Veivo, the agency’s communications specialist. “Last year we received 2,760 animal adoption forms.” Current circumstances have compelled people to work from home and spend most of their time indoors, driving many to seek a pet to help break the monotony and keep them company.

Most desire a small pet, which can easily fit into their laps, but Veivo cautions that the majority of rescue animals are shy and not yet accustomed to human contact.

If you spot an animal that appears to have been abandoned or needs help, you can find instructions on what to do here.