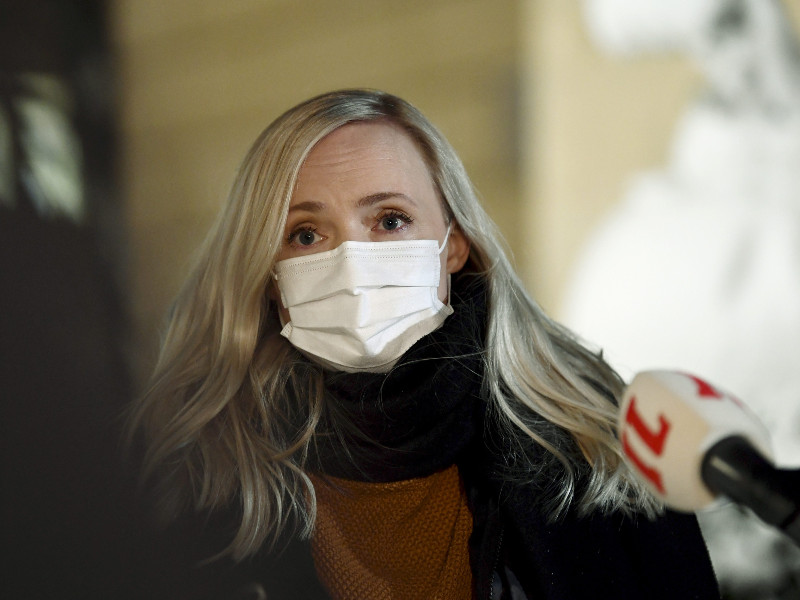 Minister of the Interior Maria Ohisalo (Greens) spoke to reporters before a government meeting at the House of the Estates in Helsinki on Wednesday, 13 January 2021. (Emmi Korhonen – Lehtikuva)

THE FINNISH GOVERNMENT is expected to adopt tougher measures to contain the spread of new, more transmissible variants of the new coronavirus.

Helsingin Sanomat reported on Thursday that the Ministry of the Interior has been asked to draw up a proposal for stepping up measures at border-crossing points with means afforded under the ordinary legislation, an indication that the emergency powers act is not to be invoked yet.

Additional measures are also being drafted at various other ministries, according to the daily newspaper.

The Ministry of Social Affairs and Health on Wednesday proposed to the government that cross-border travel be restricted as much as possible to ensure as many passengers as possible can be tested at the borders. The ministry hopes that the restrictions would put a stop to practically all travel except necessary business travel, according to Helsingin Sanomat.

An indication of this was provided on Wednesday by Prime Minister Sanna Marin (SDP).

“We’ll now have to examine whether border controls should be stepped up further by, for instance, only allowing necessary work travel,” she was quoted as saying by the newspaper.

Minister of the Interior Maria Ohisalo (Greens) on Thursday stated to YLE that the more transmissible coronavirus variants have forced the government to weigh up all possible means to reduce the number of border crossings.

“In European comparison, Finland’s border restrictions have been very strict for a long time, but we still have room to make them stricter. We’ve been prepared to do that all along if the situation warrants it. And now the situation does warrant it,” she commented to the public broadcasting company.

Ohisalo identified cross-border traffic in the north as a particular concern.

“Traffic toward Sweden was very busy at the northern border throughout the autumn. There have been over 100,000 crossings on a weekly basis. Now it’d be very necessary and beneficial to limit that movement to only the most necessary movement,” she said.

People arriving from high-risk countries are presently asked to observe a 10-day self-monitored quarantine, the duration of which can be reduced by testing negative for the coronavirus. People from Estonia and Sweden travelling for work, however, are allowed to enter the country without the quarantine or testing.

“Maybe there’ll be some kind of new quarantine or testing-related protocols for work travel,” said Ohisalo.

Also family meetings and events such as funerals and weddings have been regarded as justifiable reason to cross the border. Ohisalo on Wednesday did not rule out the possibility that also family-related travel is limited – to the extent that is possible without infringing on human rights.

“No one is deliberately trying to complicate anyone’s life, but these viral mutations have stirred up so much concern that we have every reason to use all measures at our disposal,” she told.