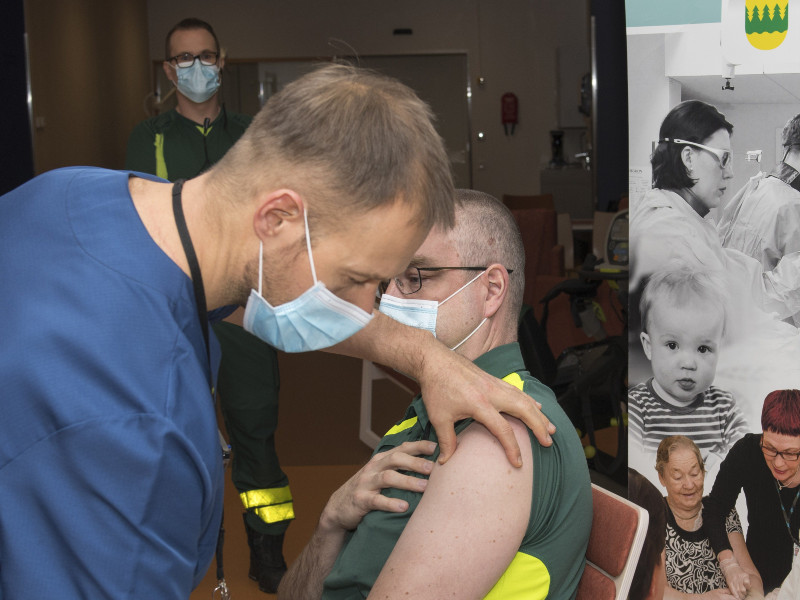 Olli-Pekka Koukkari, the head of pandemic response in Kainuu, vaccinated Jukka Angerman, the head of emergency medical services, against the disease caused by the new coronavirus, Covid-19, in Kajaani, Finland, on 5 January 2021. (Kimmo Rauatmaa – Lehtikuva)

THE WILLINGNESS of the Finnish public to get vaccinated against the new coronavirus is high compared to people in most other parts of the world, finds a global survey by the Worldwide Independent Network of Market Research (WINMR), according to YLE.

The Finnish portion of the survey was conducted by Taloustutkimus.

Finns, the survey found, rank second in Europe in terms of the willingness to get vaccinated against the rampant virus, with 81 per cent of them stating that they would definitely or probably take the vaccine. Danes were the only nation on the continent to report a more positive attitude toward the vaccine, with 87 per cent of them saying they would definitely or probably take it.

Seventy per cent of Italians and 65 per cent of Germans indicated that they would take the vaccine probably or definitely.

Hanna Nohynek, a chief physician at the Finnish Institute for Health and Welfare (THL), on Sunday reminded YLE that a vaccination coverage of less than 70 per cent will not provide the so-called herd immunity. Even a single vaccine, on the other hand, will protect at least the person taking it, she added.

She reminded that public attitudes toward the vaccine may change rapidly.

“People may say one thing but do another,” she stated to the public broadcasting company. “When they lose someone close to the coronavirus, they may suddenly start thinking differently.”

Nohynek also called attention to the swine flu pandemic witnessed roughly a decade ago: “Following the death of an eight-year-old girl, people almost started fighting over who gets to take the vaccine.”

Almost 27,000 people in 32 countries, including 651 in Finland, responded to the survey by WINMR.

THL has previously reported that its own survey found that almost two-thirds (64%) of the public are ready to get vaccinated against Covid-19. The variation in the responses may be attributable not only by the timing of the survey, but also by the phrasing of survey questions and the number of possible answers, reminded YLE.