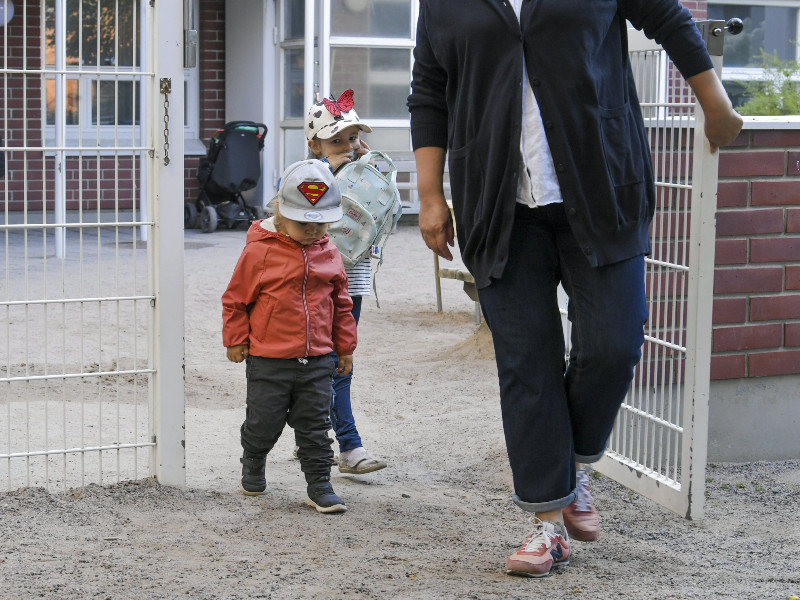 A mother and children at the gate of a daycare centre in Helsinki on 20 August 2020. (Markku Ulander – Lehtikuva)

A MINISTRY-APPOINTED TASK FORCE of researchers is proposing that child home care allowance be abolished in a bid to improve the employment situation in Finland, reports Helsingin Sanomat.

The independent task force is of the opinion that the abolition could increase employment among women by 10,000 in the long term.

Child home care allowance can be paid to parents who stay at home to care for an under three-year-old child after their earnings-related family leaves. Most of its recipients are presently mothers, according to the daily newspaper.

While research literature indicates that abolishing the allowance encourages parents to return to working life sooner, the task force acknowledged that not all parents can be expected to find employment after parental leaves, thus proposing that their livelihood be supported by introducing a supplement to the child benefit.

Appointed by the previous minister of employment in 2019 and led by Markus Jäntti, a professor of economics at Stockholm University, the task force is expected to present its final report later this winter. The preliminary conclusions were presented to the government prior to the budget session held last autumn.

Jäntti declined to comment on the matter at this point.

Helsingin Sanomat wrote that another key element of the proposal is the removal of the additional days of unemployment allowance, also known as the unemployment path to retirement. The Finnish government announced last month it has decided to gradually phase out the path in an attempt to add roughly 9,000 people to the ranks of the employed.

Doing away with the child home care allowance is a politically sensitive proposal. The Centre Party, especially, has opposed the idea, viewing that families should be able to decide how organise care for their children.

The government programme consequently states that the allowance will “continue in its present form”.

The child home care allowance consists of an allowance of over 340 euros and an income-dependent supplement of up to 180 euros. The allowance can also be paid for other under school-age siblings of the under three-year-old who is looked after at home.

Its removal may not create cost savings for the public sector, however, as it is projected to drive up demand for daycare.

Officials at the Ministry of Finance in August opted not to propose for amendments to the allowance after concluding that slashing or doing away with it would not strengthen the public economy, at least in the short term.

Other proposals forwarded by the task force include tying earnings-related unemployment allowance to the prevalent economic situation and partially replacing it with severance pay.

The government will weigh up the proposals with labour market organisations as part of a tripartite effort that is to be completed by early March. The government has promised to agree on measures that bolster the ranks of the employed by 80,000 by the end of the decade. The decisions it has made thus far are expected to have an employment impact of more than 30,000 people.