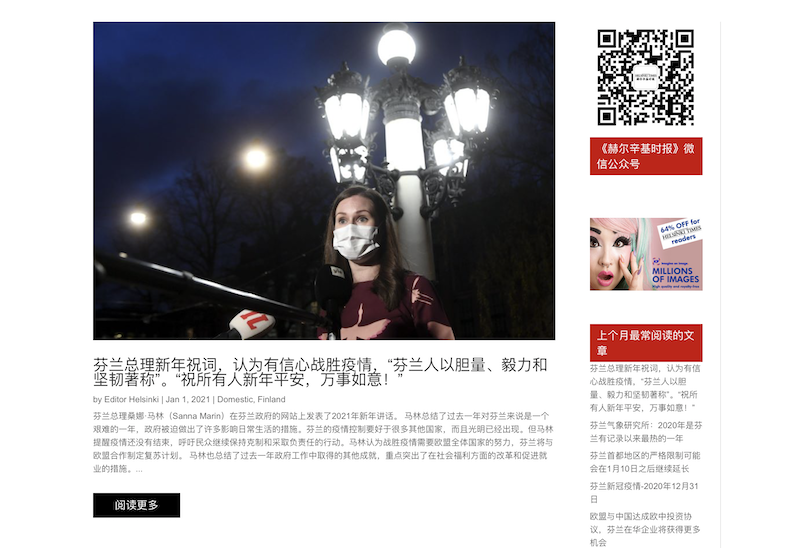 Starting first of January 2021, Helsinki Times is published in Chinese language in addition to English. The new edition, has been in the planning stage for more than a year, but was delayed due to the global pandemic.

“Our mission has been to inform the non-Finnish speakers globally and locally on news about Finland. English language serves that purpose well, but has its limits,” says Alexis Kouros, Editor in Chief of The Helsinki Times. “Mandarin Chinese is world’s most spoken language with 1.1 billion speakers.”

The target groups of the Chinese language edition are all those who are interested in Finnish news for various reasons, from being an expat in the country or having business, investment, migration or tourism interests in Finland.

China was one of the top five countries of origin of tourism to Finland with a 15% increase in 2019 “This number is certainly going to increase after the pandemic is over, Chinese tourists will soon be the largest language group visiting Finland. Also the number of students and immigrant from China has increased steadily, says Kouros.”

“The signing of the EU-China trade agreement will also bring more investor interest to the EU and Finland from China.

Helsinki Times is the first and only independent English language newspaper publishing news about and from Finland. Helsinki Times was established in early 2007 with a weekly newspaper in print and daily updates of news online. The print edition was discontinued in 2015. The online edition has continued serving the international community interested in Finland, whether they are located in Finland or elsewhere. Sections include news on politics, domestic, business, culture and lifestyle. Columns from cultural and social influencers are published on regular basis. Ex-pat readers views of life in Finland are published in a column called “Expat view”. Helsinki Times has over 370k readers per month.

Helsinki Times in Chinese will be be launched in collaboration with JimmyQ ltd. JimmyQ has had a strong presence on WeChat, with several news articles about Finland in Chinese language with thousands of readers. The WeChat channel will be officially rebranded as Helsinki Times starting today.

The Chinese edition of the Helsinki Times can be read hear: www.cn.helsinkitimes.fi