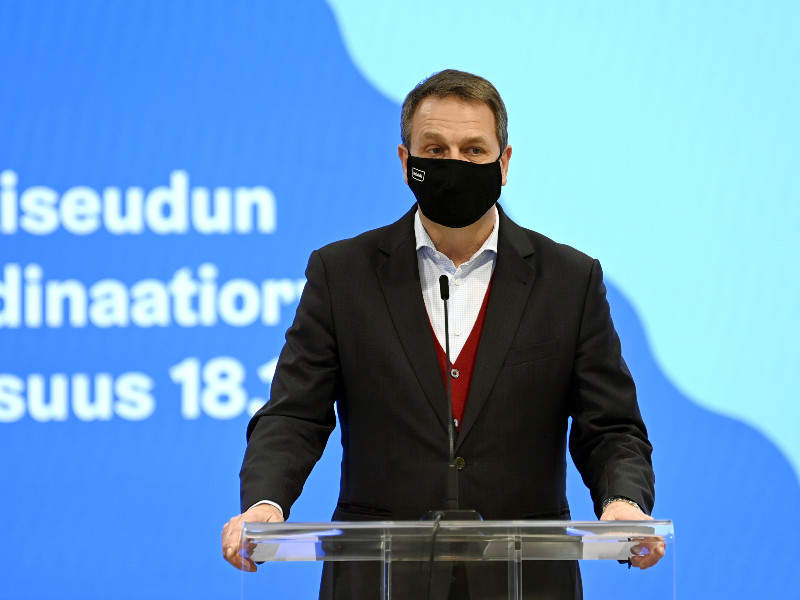 Mayor of Helsinki Jan Vapaavuori (NCP) talked about the coronavirus situation in the capital region in a news conference in Helsinki on 18 December 2020. (Emmi Korhonen – Lehtikuva)

THE CAPITAL REGION of Finland is likely to extend the strictest possible measures to contain the spread of the new coronavirus beyond 10 January, estimates Mayor of Helsinki Jan Vapaavuori (NCP).

Vapaavuori told Helsingin Sanomat on Wednesday that the epidemiological situation will be examined by the regional coronavirus coordination group on Tuesday, 5 January.

The strictest measures at the disposal of municipal authorities include suspending indoor leisure activities, shifting to remote instruction in upper-secondary education, prohibiting events with more than 10 attendees and shutting down public spaces, such as libraries. Municipalities in the capital region have also encouraged people to wear face masks and private operators to close sports facilities.

The present restrictions will remain in effect until 10 January.

The incidence of the virus consequently dropped from 270 to 170 per 100,000 inhabitants in Helsinki, according to Vapaavuori.

It is nevertheless clear based on a preliminary assessment that the restrictions remain necessary, he added. The latest statistics are associated with considerable uncertainty due to the holiday season, meaning the indicators related to the epidemic will have to be evaluated at the beginning of next week.

“We’ve now had lower infection numbers, but on the other hand we’ve made fewer tests during the holidays. That’s why there’s a risk that we have hidden infections,” he said.

The coordination group, he told, will weigh up not only the number of infections, but also the number of people in need of hospital and critical care, the share of positive tests, and the timeliness of contact-tracing efforts. Yet another variable is the new coronavirus mutation discovered in Great Britain.

“There still isn’t information on how it’ll affect the overall situation,” said Vapaavuori. “Although the trend has been downwards, our numbers are still clearly at a too high level.”

Municipal authorities have been asked especially to consider relaxing the restrictions on leisure activities for under 18-year-olds.

“I understand why that has come under criticism,” assured Vapaavuori. “Why are we shutting down sporting facilities for children, while adults who have the wherewithal can go to gyms and shopping centres?”

He said the “unsatisfactory” situation is a consequence of the incomplete nature of the act on communicable diseases. Municipalities, he explained, do not have the power to order businesses to suspend their operations.

The powers may be expanded with the amendments to be introduced in February or March, he stated.