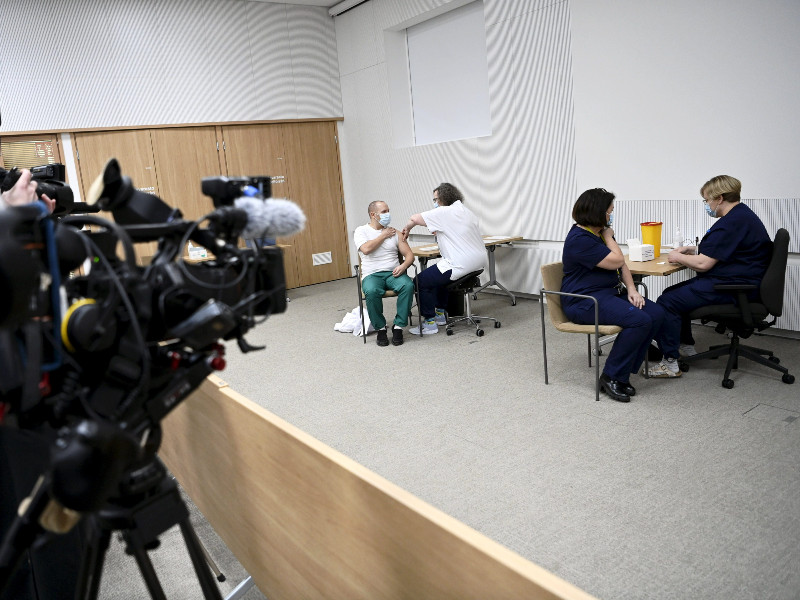 Members of the media were in attendance as the coronavirus vaccinations were administered to Benny Hellqvist and Kirsi Mustalammi of HUS at Helsinki University Hospital on Sunday, 27 December. (Antti Aimo-Koivisto – Lehtikuva)

THE HOSPITAL DISTRICT of Helsinki and Uusimaa (HUS) administered the first vaccinations against the disease caused by the new coronavirus, Covid-19, at 2pm on Sunday, report YLE and Helsingin Sanomat.

The first recipients of the long-awaited vaccine were six employees of Helsinki University Hospital, according to Helsingin Sanomat.

Benny Hellqvist, a critical care physician at HUS, described his feelings after the vaccine jab as glad, hopeful and relieved.

“We’re not over the hump yet, but this is a start,” he stated to the daily newspaper. “It has been a long year, there has been a lot of work. But now it feels somehow that there’s light at the end of the tunnel.”

The first vaccine recipients all work in the intensive and intermediate care units of the hospital district, Eeva Ruotsalainen, a deputy chief physician at HUS, revealed to YLE. Each of them, she added, was observed for 15 minutes after the administration of vaccine to make sure they have no allergic reaction.

Kirsi Mustalammi, a nurse supervisor at HUS, said she was feeling “very well” after receiving the vaccine jab. “The jab really didn’t feel at all. I’m feeling completely normal,” she commented to YLE.

She also expressed her hope that the start of vaccinations signals an eventual return to normal life. “There’s really no other solution at this moment,” she acknowledged.

Her sentiments were echoed by Teppo Heikkilä, an administrative chief physician at HUS. “This is definitely the first step to putting an end to this. There’s some kind of light at the end of the tunnel,” he stated to the public broadcasting company.

Finnish authorities yesterday took delivery of the first, 9,750-dose shipment of the vaccine developed by Pfizer and Biontech. The shipment will enable the vaccinations of 4,875 people against the disease, as each recipient will require a second vaccine jab three weeks after the first one.

“It won’t be until four weeks later that the vaccine recipients will have the full benefits of the vaccine,” reminded Heikkilä.