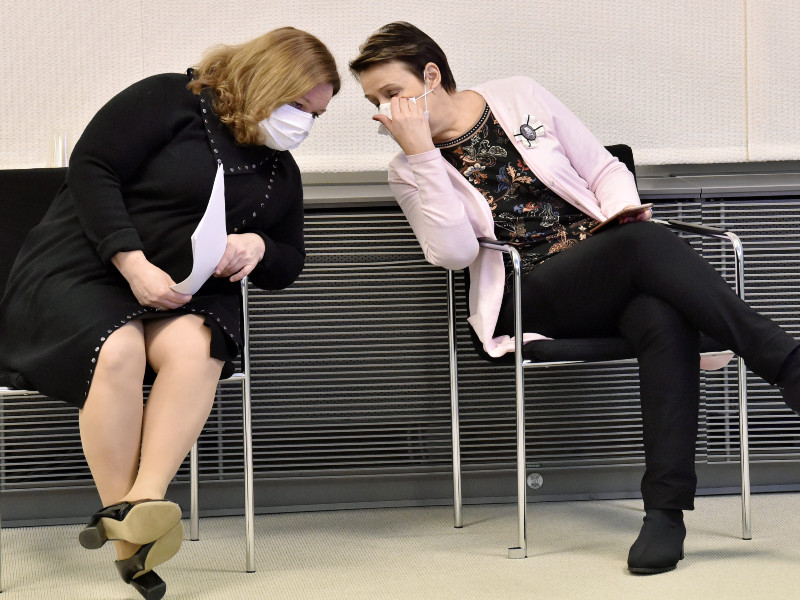 Minister of Family Affairs and Social Services Krista Kiuru (SDP) and Kirsi Varhila, the permanent secretary at the Ministry of Social Affairs and Health, exchanged words during a press conference about the coronavirus situation in Finland on Tuesday, 22 December 2020. (Jussi Nukari – Lehtikuva)

THE FINNISH INSTITUTE for Health and Welfare (THL) on Tuesday unveiled its proposal for the order in which the population should be vaccinated against the disease caused by the new coronavirus, Covid-19.

THL stated in its proposal that the population should be divided into three major categories.

The vaccine, it said, should be administered first to health care personnel treating patients infected with the virus and the personnel and residents of facilities providing around-the-clock care for the elderly, then to elderly people and people with medical conditions that predispose them to serious forms of the disease, and finally to the rest of the population.

The categories will be clarified for people with chronic health conditions as more information on the new vaccines becomes available.

The first group alone contains over 100,000 people, according to THL.

Kirsi Varhila, the permanent secretary at the Ministry of Social Affairs and Health, revealed earlier yesterday that the country has a pre-purchase agreement for 18.5 million doses of a coronavirus vaccine, an amount that would suffice to vaccinate over nine million people.

“This way we’re trying to give assurances that a vaccine has been set aside for all Finns,” she was quoted as saying by Helsingin Sanomat.

Moderna, for example, has said it expects to receive the authorisation on 6 January.

Varhila confirmed that the first batch of vaccines – about 10,000 doses – will arrive in Finland on 26 December. The vaccinations are set to begin at university hospitals across the country on 27 and 28 December.

“When the batch is distributed between five university hospital-based hospital districts, there won’t be too many [doses] for each hospital district – especially when you have to set aside another dose from the same batch for [the second jab] that’s given three weeks after the first,” she stated.

The Pfizer-Biontech vaccine has been targeted at over 16-year-olds and proven effective also for people who fall into the risk groups for having, for example, asthma, diabetes or a chronic cardiovascular disease, said Marjo-Riitta Helle, a head of unit at the Finnish Medicines Agency (Fimea).

She added that the vaccine has not been tested sufficiently on expecting mothers, reminding that although nothing alarming has been found in trials expecting mothers should talk about taking the vaccine with their physician. People who are allergic to one or more components of the vaccine should refrain from taking it, even though it has only caused mild side-effects during trials.

Helle also underscored that the vaccine does not guarantee protection against the disease until the second jab has been received.

Taneli Puumalainen, the head of infectious diseases control at THL, on Tuesday refused to speculate on the size of the vaccine batches to be delivered in January.

“The information is constantly changing. The EU has mulled over vaccine distribution to make sure all countries receive the first batch at the same time. The additional deliveries will be proportional to population,” he told.

Helsingin Sanomat wrote that the deliveries are to continue at a pace of one per week.

“The amounts will creep up very slowly, and we assume we’ll receive some tens of thousands of doses next week,” said Puumalainen.

This, he added, means vaccine doses can be distributed to all hospital districts starting next week.