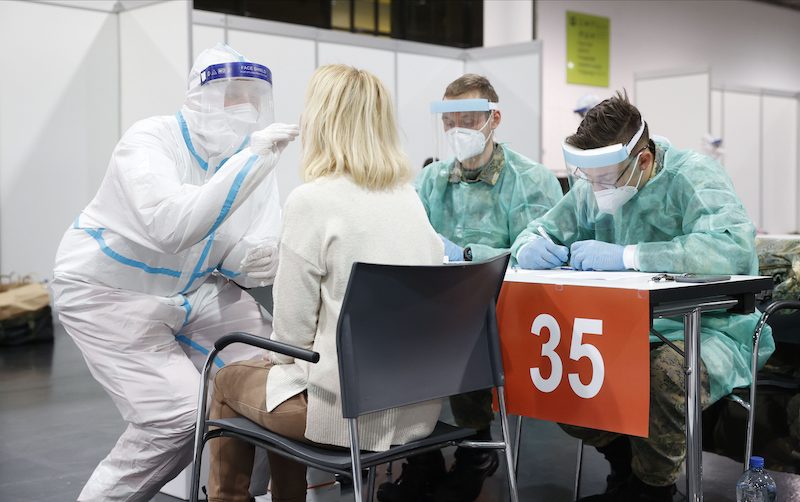 COVID-19 mass-testing on December 12, 2020, at the exhibition hall in Graz. - Mass detection tests have been held in Spain and Czech Republic as well. LEHTIKUVA / AFP

Back in March, Finland avoided high infection and mortality rates from Covid 19 by going into an almost total shutdown. The government temporarily adopted existing emergency laws and among other measures, ordered the closure of the country’s borders, restaurants, and schools, limited public gatherings, and encouraged everyone who can work from home to do so.

Fast forward eight months, and we are back in the same situation. Infection rates are rising and so are the number of hospitalised patients and deaths from Covid-19 complications.

The number of new cases is approaching 500 a day, over four times the highest numbers we had in April. New cases are increasing by 10% a day and over 2% of tests return positive. One country after another is going to shut down again, and some doctors are asking for the same in Finland.

Testing, contact tracing, and quarantines have formed the pillars of the fight against the spread of the Sars-CoV-2 virus. These are all costly. Testing alone is costing Finland 117 million euros every month and is estimated to add up to 1,4 billion euros for one year.

Vaccines are lighting the end of the tunnel but we need a transient solution.

It will take time before the majority of the population is vaccinated. Another shut down would also be very costly and devastating to businesses. The shutdown last spring cost Finland 1.2 billion euros a week! However, Finland has a smarter option now. We could test the entire population, isolate the infected and shut down the virus, not the society. This together with effective contact tracing and enforced quarantines and mask use would keep the country open until herd immunity from vaccination takes effect. A strategy based on these measures would need more effort but will be less costly than a shutdown.

This can be done in a cost-effective and fast way: Group testing.

Group or Pool testing has been used successfully in many countries. This method, which was first used in the 1940s, combines samples of groups of people. An equal number of samples collected from nasal and throat swabs are mixed together and tested once. Bundles that test negative are put aside, but if a group-sample tests positive, every single sample in that group is then retested individually. There are different methods of doing this and there are mathematical calculations on what group sizes suit Finland's different areas with different infection rates.

China used this method for testing 10 million Wuhan residents in only around two weeks. Other countries also used this method successfully. Last month, Slovakia tested half of its population - 2.5 million people - in one day. 25,850 of them tested positive.

Finland is ideal for pool testing because of the relatively low percentage of infections, small population, and concentration of the infections in a few areas. Even mass testing of the most affected urban population would be highly effective in slowing down the spread.

Finns returning from abroad or exposed to confirmed cases have been asked to stay in isolation for two weeks. These voluntary quarantines have hardly been watertight. Controlled and enforced quarantines of the infected and high-risk people have had a significant effect in controlling the spread in China, New Zealand, and South Korea.

Trust in citizens would be great if it would work. We have installed thousands of speed cameras in the country and are sending over 70 000 tickets, finning the nation 50 million euros per year. Covid-19 has already killed more people than road accidents in Finland.

The same goes for face masks. Authorities messed up this one by even actively discouraging people from wearing them. Now that masks are widely available and affordable, it shouldn't be a choice. Face masks work.  When worn properly, a mask reduces the droplets and aerosols leaving an infected person’s breath, and a mask stops or reduces the aerosols reaching a healthy person wearing it. Evidence has accumulated on this topic. Far Eastern nations that are used to wearing a face mask in public have had lower transmission rates. Last March, the Czech Republic, and Slovakia were the only two countries in Europe that made wearing a mask mandatory. After the government decree, Czechs and Slovaks went to work to make millions of homemade masks. The result was a dramatic slow down in the spread of the virus. The Czech Republic became the most successful country in Europe in the fight against Covid-19.

In contrast, when this October a return to mandatory mask-wearing was ditched by a seemingly political decision, the country’s infection rates skyrocketed to over 580 000 cases.

We were not prepared for this strategy back in March, but now we are. We have the testing and tracing capacity; hopefully.

It’s easier to take the lazy decision of shutting down the country, but it would be irresponsible and harmful. The Finnish “Sisu” demands a fight, not a retreat.