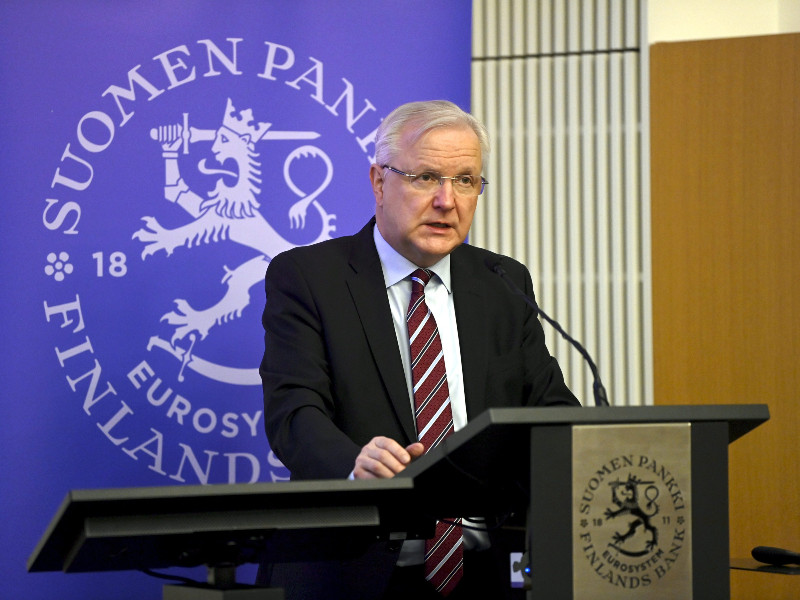 Olli Rehn, the governor of the Bank of Finland, discussed the outlook for the Finnish economy in a press conference in Helsinki on Tuesday, 15 December 2020. (Antti Aimo-Koivisto – Lehtikuva)

THE FINNISH ECONOMY will recover from the crisis set off by the coronavirus pandemic but continue to expand at a fairly modest rate also after the crisis, predicts the Bank of Finland.

The Bank of Finland on Tuesday published its latest assessment of the economic situation in Finland, emphasising that economic policy makers must strike a balance between fighting the acute crisis and tackling the longer-term economy and employment-related problems.

“My main message is is that we have to be able to live in two times in terms of decision making and economic policy: to both prevent the acute health and economic crisis and, on the other hand, resolve the long-term problems in employment and the economy,” said Olli Rehn, the governor of the Bank of Finland.

The national monetary authority estimated that although the economy has not been hit as hard by the crisis as other economies, the winter will be long and hard – even if vaccines offer some hope of the crisis nearing its end.

“Our forecast indicates that the coronavirus crisis will leave a permanent mark on the Finnish economy, but the recovery from the crisis currently seems to be a bit faster than from the financial crisis,” said Meri Ostbaum, the head of forecasting at the Bank of Finland.

“Economic growth is set to rely primarily on private consumption in the coming years,” said Ostbaum. “The coronavirus crisis is not expected to leave a big mark on household consumption, but the consumption is expected recover roughly to the levels preceding the crisis. The structure of consumption can, of course, change permanently.”

The forecast entails both positive and negative uncertainties, as even the short-term outlook is clouded by questions about how quickly the global pandemic can be brought under control.

“It’s very difficult to predict too reliably how the pandemic will progress and how it’ll impact the economic and financial environment. Reaching the necessary level of population immunity will in any case take some time, and we can’t rule out the possibility of setbacks entirely,” reminded Rehn.

While it is possible that the vaccines are deployed early this year and economic growth will accelerate more than expected, it is also possible that the epidemic will take a turn for the worse in the winter and the government has to resort to widespread restrictions on economic activity to protect the public.

If the pandemic did prolong, the national economy would contract also in 2021, according to the Bank of Finland.

Rehn pointed out that there is reason for optimism, too. The economic recovery is set to be propped up by the relaxed financing environment, stimulus-oriented fiscal policies and the rebound in demand expected next year.

The outlook for 2023 is dimmed especially by two long-term challenges in Finland. The sustainability deficit in the public economy and modest labour productivity, both of which add to the urgency of making decisions on structural reforms that brighten the outlook.

“The new estimate of the sustainability deficit is 5.5 per cent relative to the gross domestic product,” told Rehn.

“Reforms that have the biggest impact in light of research data are important especially for employment growth. Another key is improving the preconditions for raising labour productivity. Research and development work, as well as other production-related investments, are of great significance from that viewpoint, but we’ve fallen behind other parts of the eurozone in that regard.”