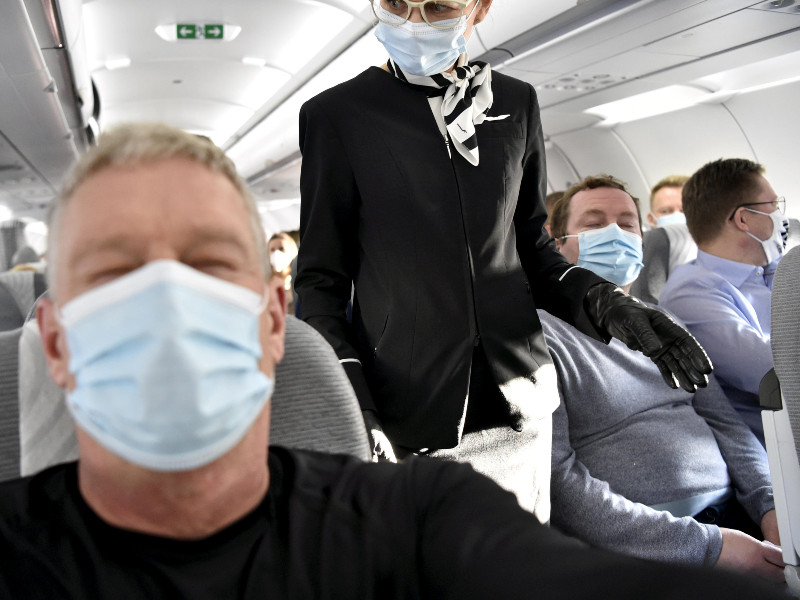 Passengers and cabin crew wore face masks on a Finnair flight to Kittilä, Finnish Lapland, on 20 November 2020. A disinformation campaign spreading on social media claims, for example, that there is no scientific evidence of the benefits of masks. (Jussi Nukari – Lehtikuva)

A SOCIAL MEDIA CAMPAIGN is spreading disinformation about the new coronavirus in order to undermine the instructions of authorities in Finland, reports Helsingin Sanomat.

The campaign launched earlier this week claims that it is possible to prevent coronavirus infections by, for instance, eating healthy food, drinking more clean water, enjoy the serenity of outdoors and focusing on happiness.

It also alleges that there is no scientific evidence of the benefits of face masks and encourages citizens both to ignore the “scaremongering campaigns” of decision-makers and the media and to meet their friends and hug passers-by.

Helsingin Sanomat on Wednesday wrote that the disinformation is being spread especially by so-called well-being coaches, some of whom are suspicious of traditional medicine, and their social media followers. Some of the allegations align with those spread by the anti-semitic conspiracy theory QAnon.

Mika Salminen, the director of health security at the Finnish Institute for Health and Welfare (THL), stated to the newspaper that the instructions spread by the campaign are inaccurate, irresponsible and dangerous.

“We do have scientific evidence of the benefits of masks when they’re used properly. It’s also clear that a high number of contacts increases the risk of infection,” he retorted.

“I understand that it can feel that the situation has been on for a while and that the instructions and restrictions can be frustrating. But we have to face the facts. We’ll have to persevere and combat the pandemic for a while still.”

The timing of the campaign suggests it may be a response to a social media campaign raising awareness of most effective means to combat the epidemic launched by the Finnish government and THL.

“That the campaign has provoked a counter-reaction is by no means a surprise,” Jussi Toivanen, a chief communications specialist at the Office of the Prime Minister, said to Helsingin Sanomat.

Toivanen pointed out in his e-mail to the newspaper that various conspiracy theories have arisen around the world in conjunction with the coronavirus epidemic. Similar themes have been discussed also in Finland.