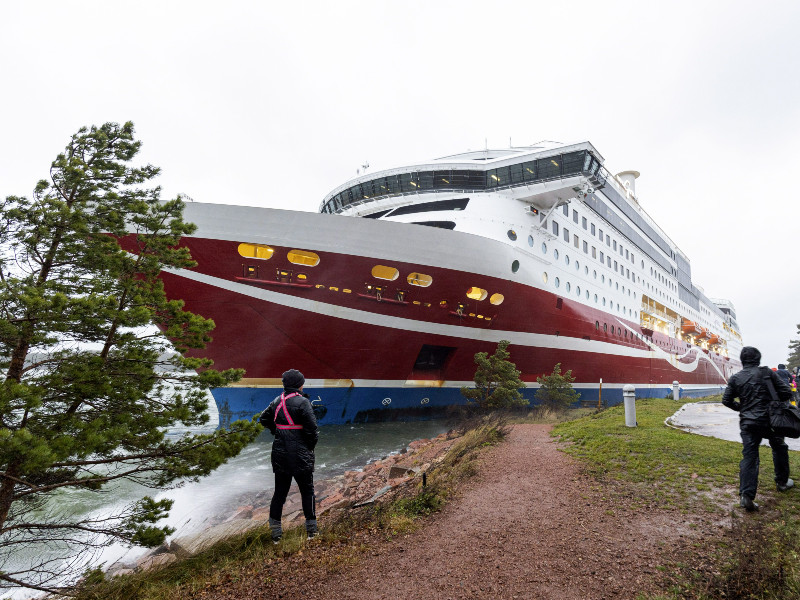 Viking Grace ran aground in strong winds about 500 metres south of the Port of Mariehamn on Saturday, 21 November 2020. (Niclas Nordlund – Lehtikuva)

VIKING GRACE arrived at the Port of Turku on Sunday evening after running aground in windy conditions close to the Port of Mariehamn, Åland Islands, on Saturday.

The passenger ferry began its journey with approximately 260 passengers and most of the crew on board shortly after 1pm on Sunday, after authorities had determined that the ferry had sustained no major damage in the accidental grounding and journey presented no safety risks.

A total of 331 passengers and 98 crew were aboard the ferry at the time of the grounding, which took place about 500 metres south of the Port of Mariehamn.

The ferry will be towed for further inspection and repairs to Turku Repair Yard in Naantali, South-west Finland, Johanna Boijer-Svahnström, the director of communications at Viking Line, told Helsingin Sanomat on Sunday.

Passengers from Åland who were aboard the vessel at the time of grounding disembarked in Mariehamn, while those from Sweden returned to Sweden aboard Viking Amorella.

Boijer-Svahnström on Sunday confirmed to YLE that the weather conditions had a role in the incident but underlined that the cause of the grounding will be determined as the investigation progresses.

“The wind reached gust speeds of roughly 30 metres per second. One gust had pushed the vessel against the shore,” Jan Hansen, the CEO of Viking Line, commented to YLE on Saturday.

A preliminary investigation into the incident has been launched also by the Safety Investigation Authority (OTKES).