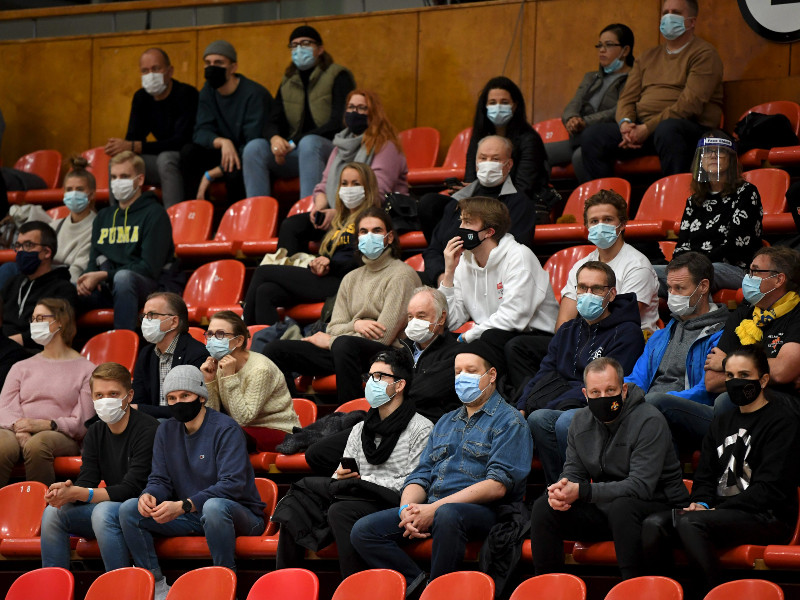 Spectators donning face masks at a basketball game between Seagulls and KTP-Basket in Helsinki on 13 November 2020. (Antti Aimo-Koivisto – Lehtikuva)

MORE THAN 70 PER CENT of Finns are using face masks on public transport and in other public places where avoiding close contact with others is impossible in accordance with the recommendation of the Finnish Institute for Health and Welfare (THL), finds a survey commissioned by Helsingin Sanomat.

Face masks have been adopted especially by the elderly, with 89 per cent of over 70-year-olds and an almost equivalent share of 60–69-year-olds saying they wear a mask.

Women, the survey also found, are more willing to wear a mask than men, although also the majority of male respondents stated that they have complied with the recommendation.

Helsingin Sanomat on Friday highlighted that the poll is evidence of a rapid change in behaviour, as over a half of respondents were not using masks as recently as in August. The first survey was conducted around two weeks after masks were recommended as a good supplementary measure to limit the spread of the new coronavirus by THL.

THL in September issued another recommendation, instructing the public to use masks also in public indoor spaces, upper secondary education facilities and public events where avoiding close contact is impossible.

Despite the increasing use of face masks, the coronavirus has continued to spread in Finland.

THL reported yesterday that the number and incidence of infections is on the rise, with 1,534 new infections reported between 9 and 15 November. The total represents an increase of 122 from the previous week and translates to an incidence of 28 cases per 100,000 inhabitants.

Kantar TNS interviewed 1,044 people for the survey between 6 and 11 November.