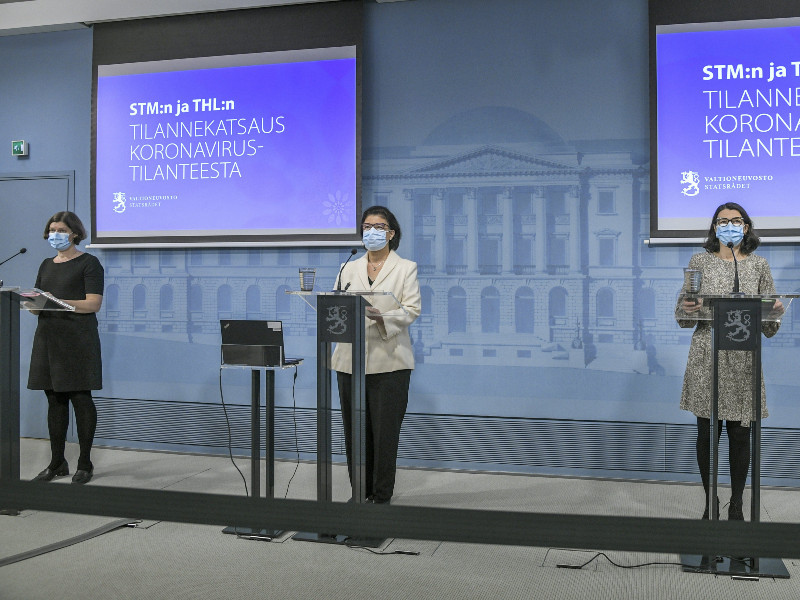 Officials at the Finnish Institute for Health and Welfare (THL) and Ministry of Social Affairs and Health provided an update of the coronavirus situation in Finland in Helsinki on Thursday, 5 November 2020. (Markku Ulander – Lehtikuva)

THE CORONAVIRUS EPIDEMIC has continued to vary considerably between regions but remained fairly stable in recent weeks in Finland.

Officials at the Finnish Institute for Health and Welfare (THL) and Ministry of Social Affairs and Health on Thursday provided a weekly update of the epidemic, revealing that the incidence of coronavirus cases stood at 48 per 100,000 inhabitants in the past two weeks.

A total of 189 new cases were entered into the infectious diseases register between Wednesday and Thursday, bringing the national total to 17,119. The number of people in hospital care with symptoms caused by the virus decreased by five to 65, a number that includes 15 people in intensive care.

THL on Thursday also reported that the share of positive tests has risen and stood at 1.8 per cent between 26 October and 1 November.

“The situation is by no means reassuring but rather volatile,” Liisa-Maria Voipio-Pulkki, the director of strategic affairs and chief medical officer at the Ministry of Social Affairs and Health, was quoted as saying by YLE.

“Unfortunately coronavirus cases are on the rise again. The details on hospital and intensive care are hard facts, and they aren’t really affected by the reporting delay. Regional variations are still pronounced and fairly quick, too, but at the general level it’s on the rise,” she commented in a press conference.

Voipio-Pulkki said one notable change from the previous week is that the number of regions where the epidemic is moving in a positive direction has decreased.

Finnish health care authorities have continued to improve their success rate for tracing infections to their source, with about 60 per cent of the cases nationwide currently traceable.

The officials revealed that about 60 per cent of the traceable infections were traced to a family member, 10–15 per cent to social contact with friends and family, 10 per cent to workplaces and eight per cent to free-time activities.

The number of infections traced to public events and restaurants has declined as a consequence to the restrictions introduced to, for example, the opening hours of restaurants, said the Ministry of Social Affairs and Health.