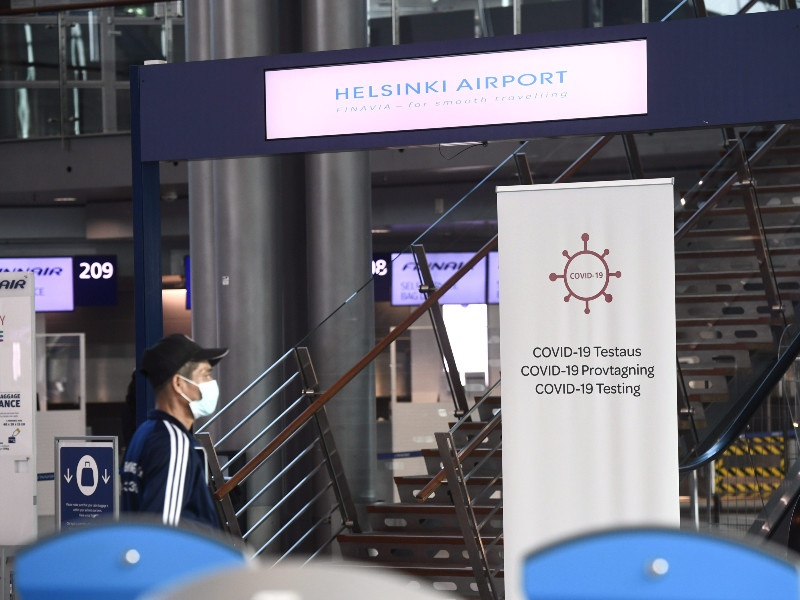 A face-mask clad passenger looking at a banner directing arrivals to a coronavirus test at Helsinki Airport in Vantaa on 9 October 2020. (Emmi Korhonen – Lehtikuva)

PROVISIONS of the EU law and Finnish constitution have once again proven a stumbling block for the officials drafting new testing and quarantine requirements for people arriving in Finland, reports Helsingin Sanomat.

The Finnish government was less than two weeks ago reportedly planning on ruling that passengers, including those from other parts of the EU, must provide proof of a recent negative coronavirus test to arrive freely in Finland.

A negative test result would have also been a requirement for EU citizens seeking entry from countries regarded as dangerous due to the incidence of the new coronavirus. Information obtained by Helsingin Sanomat, however, indicates that the plan has been scrapped due to the freedom of movement afforded under the EU legislation.

The government, the newspaper wrote yesterday, is still expected to place great emphasis on negative test results received before departure but stop short of making them a requirement for entering Finland.

The information suggests that travellers would be allowed to enter the country for a maximum of three days if they have proof of a negative coronavirus test obtained no earlier than 48 hours before their departure. The proof would also exempt passengers arriving for a three-to-six-day visit from a three-day quarantine, although they would be required to take a second coronavirus test upon arrival.

Passengers staying in Finland for more than six days would be required to provide proof of a negative test taken in their country of departure and take another test after a mandatory three-day quarantine after their arrival. The test and quarantine orders would be issued by a physician of infectious diseases or an official authorised to do so by one, according to Helsingin Sanomat.

Finnish citizens and permanent residents would be able to enter the country freely, although also they would be instructed to observe a quarantine if their country of departure is not a safe, or so-called green, country.

The government is expected to define a green country as any country with a similar or better epidemiological situation than Finland.

A negative coronavirus test taken in the country of departure would thus be an absolute requirement only for people arriving from certain countries outside the EU. Proof of a negative test, however, would not enable people to circumvent travel restrictions imposed by the 27-country bloc, the newspaper added.

Helsingin Sanomat on Tuesday reminded that the entry rules may change before they are announced by the government. The rules are to be discussed by relevant cabinet members on Thursday.