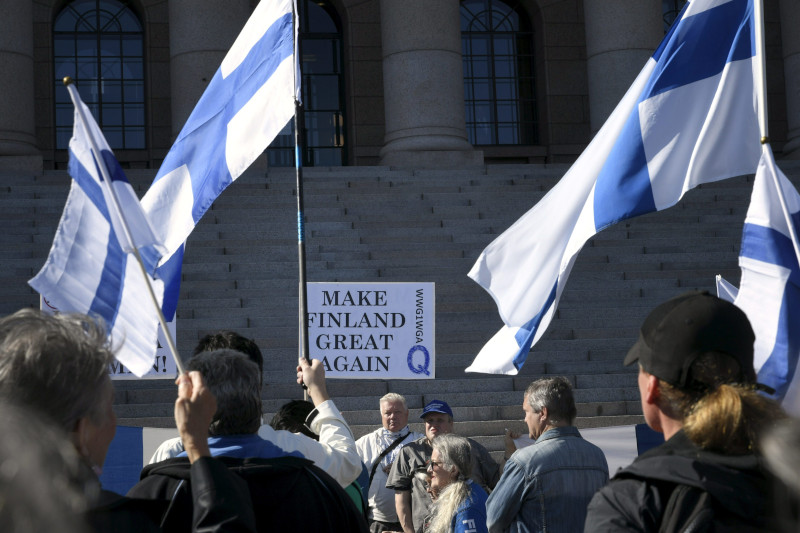 QAnon, a far-right conspiracy theory movement that originated in the United States, has made its way to Finland, ensnaring a growing number of supporters in the country. QAnon first emerged on 4Chan—a largely unfiltered imageboard website—in October, 2017, when an anonymous user known only as Q (derived from the Q-level security clearance they claimed to have) posted coded messages expounding numerous conspiracy theories.

These theories place American president Donald Trump in the role of a saviour-like figure discreetly working towards dismantling an evil “deep state” and claim, among other things, the existence of secret cabals of child trafficking, that 5G causes cancer and that certain celebrities and public figures have been replaced by body doubles.

Since its conception, QAnon has gained traction rapidly, spreading across virtual platforms with the speed and intensity of the very virus it claims to be a hoax, amassing a wildly enthusiastic global following.

While many might dismiss these conspiracy theories as the laughably absurd and primarily harmless ramblings of a fringe group, they have proved capable of dangerous, real-world consequences, being linked to numerous instances of violence. QAnon has also led to the dissolution of social and familial bonds in many cases.

Last month, Facebook announced that it would ban QAnon on all its platforms (including pages, groups and Instagram accounts). Other major platforms such as YouTube, TikTok and Twitter followed suit, disabling accounts that promote content associated with QAnon and related conspiracy theories. Supporters have since shifted to less regulated online platforms such as Telegram.

The growing global magnitude of the phenomenon has given rise to a counter-movement of sorts, with the emergence of a number of organisations and communities dedicated to debunking unfounded theories and containing the destructive after-effects of QAnon.

Johannes Koski, a Finnish democracy activist and UX director of a gaming company, founded Kollektiivi, an international collective of researchers, scientists and activists committed to raising awareness about the dangers of conspiracy theories. According to Koski, the QAnon movement has gained significant ground in Finland despite the country’s strong democratic ideals and exceptional education system.

“For the past decade, social media algorithms have been increasingly connecting high-risk individuals to radicalising material on a global scale,” he says. “Trust in media, science and government institutions has dropped around the world, partly as a side-effect of the rise of political populism.”

Koski also attributes the sudden and exponential increase in conspiracy theorists to the detrimental effects that the global pandemic has had on public mental health. The pandemic has brought existing socio-economic inequalities in Finland to the fore, heightening feelings of powerlessness and fomenting mistrust in established public institutions.

This July, Finnish QAnon supporters gathered for the first-ever Q weekend festival at Dragsfjärd in Southwest Finland. According to Iltalehti, the QAnon Suomi group on Facebook had garnered over 2,200 members as of September (the group has since been removed by Facebook).

Over the last few months, QAnon has gained an increasingly strong foothold in Europe, thriving especially in Germany, where it has become inextricably linked with anti-semitism and the Neo Nazi movement. As in countries such as Germany, Italy and the UK, QAnon in Finland is strongly rooted in radical right-wing ideology, fostering intense, anti-immigrant sentiment and distrust of local and international media.

Finnish proponents of QAnon support Finland’s exit from the EU (termed Fixit) and deem the Koronavilkku contact tracing app a thinly-veiled attempt by the government to monitor citizens. Like their counterparts in other countries, they hold that COVID- 19 is a scam of international proportions, propagated by various governments across the globe.

Koski believes that setting up an international network to educate the public about the potential dangers of misinformation and providing emotional support to families of those who have fallen victim to radical thinking are key to mitigating the adverse effects of such movements.

“Sharing information and networking between dozens of experts, researchers, journalists and activists is very helpful. We have plans for starting a podcast to educate the public and we've collected lots of information, research articles, videos and news articles on our new website (kollektiivi.org). Plus it helps to have a community around you when you're standing against a digital, cult-like movement of millions of followers,” he adds.