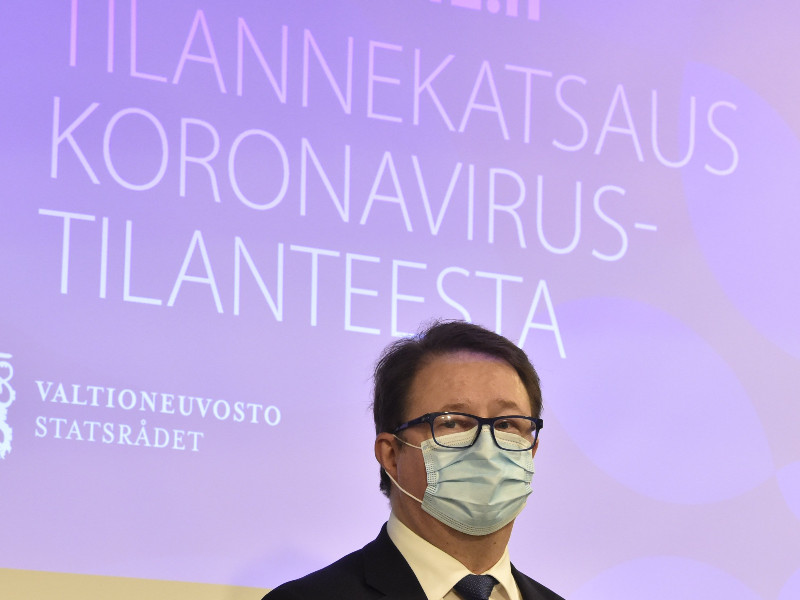 Mika Salminen, the head of health security at the Finnish Institute for Health and Welfare (THL), provided an update on the coronavirus epidemic in Finland in Helsinki on Thursday, 29 October 2020. (Jussi Nukari – Lehtikuva)

THE DAILY NUMBER of people infected with the new coronavirus appears to have stabilised in Finland.

The Ministry of Social Affairs and Health on Thursday announced in a news conference that the incidence of new cases, the number of analysed samples and the share of positive samples have stayed almost unchanged for a couple of weeks.

“The situation seemed alarming when the number of infections was rising rapidly. It's a fact that the peak has now been passed,” Mika Salminen, the director of health security at the Finnish Institute for Health and Welfare (THL), was quoted as stating by Helsingin Sanomat.

The demand for hospital capacity has similarly remained modest.

“There is demand for hospital and critical care all over Finland,” Liisa-Maria Voipio-Pulkki, the director general of strategic affairs and chief medical officer at the Ministry of Social Affairs and Health, summarised according to YLE.

“The numbers, however, remain so low that we can’t tell whether the morbidity of intensive-care patients or the clinical presentation is different from last spring. The average age of people admitted to intensive care is exactly the same as it was last spring, slightly less than 50 years,” added Voipio-Pulkki.

The ebbing of the tide of infections is evident also regionally.

Vaasa Hospital District remains the only district in the spreading stage of the epidemic, a stage characterised by a regional incidence of 18–50 infections per 100,000 inhabitants and an inability to trace more than 50 per cent of infections to their source. With the Hospital District of South Ostrobothnia reporting that it has returned from the acceleration to the base stage, only five hospital districts remain in the acceleration stage.

Salminen said Finland was in a relatively good position to face the second wave of infections after a relatively quiet summer in terms of infections. Finns, he added, have also followed some of the most important recommendations, such as social distancing and use of face coverings, commendably.

“Finns are mostly following the instructions and recommendations. It’s advisable to stick to the measures that have been adopted regionally,” he said.

He also lauded the public for embracing the national contact-tracing app, Koronavilkku. “A total of 2.5 million Finns have downloaded Koronavilkku. And those who are given an infection code have also been using it. This speeds up notifications for possible exposures,” told Salminen.

Improvements have also been made in tracing coronavirus infections to the source, with the share of untraceable infections standing at 35–40 per cent for the period between 19 and 25 October. The share of infections that cannot be traced to their source has fallen below the 50-per-cent mark also in the Hospital District of Helsinki and Uusimaa (HUS).

“In Finland, tracing effort seems to be smoother and chains of infections are being broken successfully. The development has been positive especially in HUS,” said Voipio-Pulkki.

She underlined, however, that it is important to follow the instructions to limit the spread of the virus especially as the festive winter season approaches and people start spending more time indoors.

“We should now really stick with this, so that we don’t end up as worse-off as some other countries,” she said.