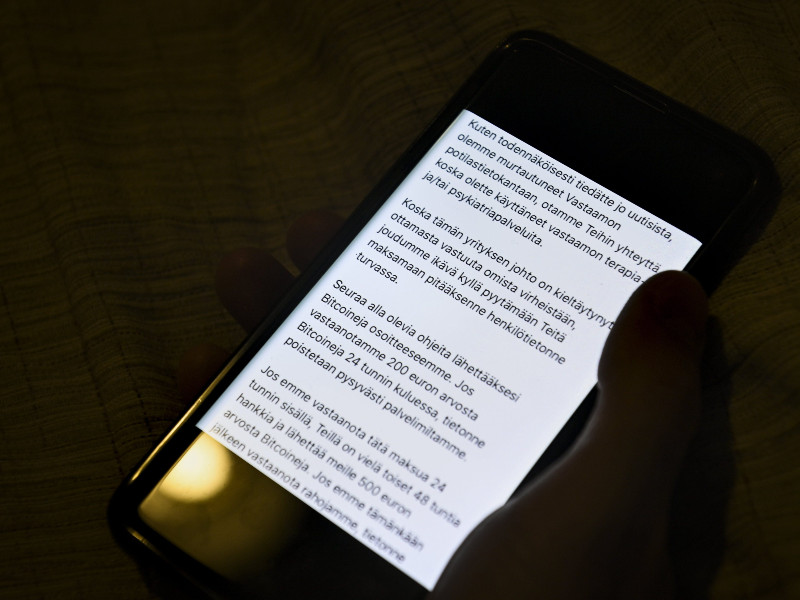 A photograph of a blackmail message sent to an individual following the hacking of Psychotherapy Centre Vastaamo. (Emmi Korhonen – Lehtikuva)

THE NATIONAL BUREAU of Investigation (KRP) has revealed it has received 13,500 reports of an offence in connection with the hacking and blackmailing case revolving around Psychotherapy Centre Vastaamo.

“That number is from late Tuesday afternoon, and it’s rising all the time because of delays in recording,” Tero Muurman, a detective chief inspector at KRP, told Helsingin Sanomat on Wednesday.

The daily newspaper highlighted that, judging by the number of victims, the case is on track to become the largest or at least one of the largest criminal cases in the history of Finland. The dubious record is presently held by Wincapita, a Finnish Ponzi scheme that received more than 100 million euros from 10,000 investors between 2005 and 2008.

“We want to send a calming message,” stated Muurman. “We have the best experts in the country. In that sense, I’m rather confident. I won’t disclose the numbers, but I can say we have an appropriate amount of expertise across the line dedicated to this. Our best people are working on this.”

He added that although the investigation is continuing, there has yet been a breakthrough nor is one on the horizon.

“As for the question of perpetrator, I can’t comment on that in any way. Whether the hacker and blackmailer are the same person is another thing we can’t give a solid answer at this point in time,” he stated to Helsingin Sanomat.

STT on Thursday wrote that the author of the blackmail messages sent to the clients whose personal data was compromised in the hacking may be a foreigner, judging by certain details in their use of Finnish. The linguists interviewed by the news agency viewed that the Finnish-language text could be a translation.

Muurman on Wednesday reminded that this is only speculation – as did the linguists.

“Only facts will lead us to the perpetrator,” he stated.

The case is presently being investigated as aggravated computer break-in, aggravated extortion and aggravated dissemination of information violating personal privacy.