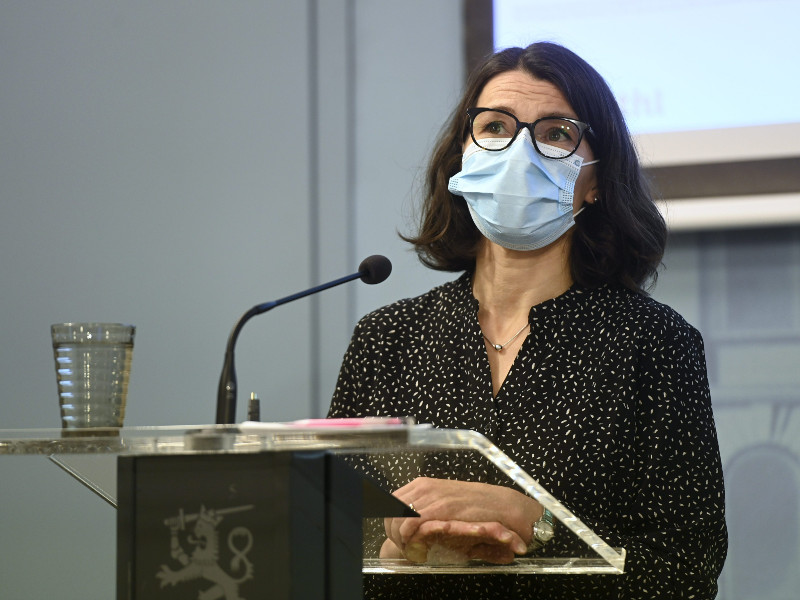 Anna Katz, a project manager at the Finnish Institute for Health and Welfare (THL), reacted at a press conference about the coronavirus situation in Finland in Helsinki on Thursday, 22 October 2020. (Emmi Korhonen – Lehtikuva)

A TOTAL OF 222 new coronavirus infections were reported in Finland between Tuesday and Wednesday, Anna Katz, a project manager at the Finnish Institute for Health and Welfare (THL), stated in a news conference on Thursday.

“It seems that 200 is the daily new normal at the moment,” she said.

THL reported this morning that the daily number of new infections has decreased after growing significantly for roughly a month, with also the proportion of positive tests decreasing across the country from the previous week.

“40 per cent of infections happen at home. That’s a factor we unfortunately can’t do much about,” she lamented.

“The incidence is fairly high in [the Hospital District of Helsinki and Uusimaa] HUS, about 85 cases per 100,000 inhabitants. Over 60 per cent of infections can’t be traced to source,” she said.

“Vaasa is a case of its own,” she added. “The situation was calm for a long time, but then the epidemic flared up, pushing the cases and incidence rate high. The share of positive samples is currently over four per cent, for the past two weeks.”

Liisa-Maria Voipio-Pulkki, the chief medical officer at the Ministry of Social Affairs and Health, said it is positive that the share of positive tests is decreasing nationwide, at least in part due to regional restrictions, but added that there are minor concerns about an increase in infections among the elderly.

Ilta-Sanomat on Monday reported that the virus has spread to almost all residents and half of staff members in an assisted-housing unit in Vaasa.

Voipio-Pulkki also pointed out that efforts to trace and quarantine people exposed to the virus have largely been successful, as evidenced by the fact that a third of infections are detected in people who have already been ordered into quarantine.