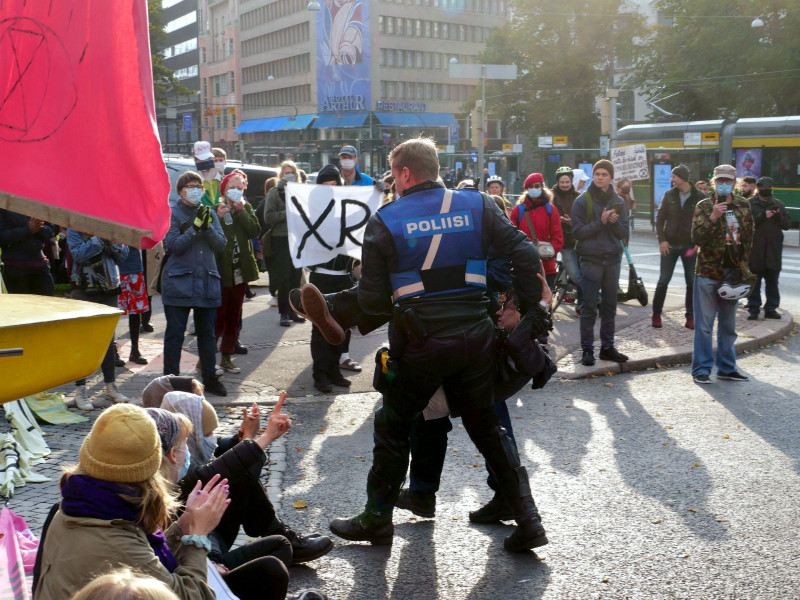 THE RIGHT TO PROTEST should not be misconstrued as a right to break the law, reads a report presented to Minister of the Interior Maria Ohisalo (Greens) on Thursday by the National Police Board.

Requested by Ohisalo, the report examines the measures employed by police officers intervening in a demonstration organised in downtown Helsinki on Saturday, 3 October.

The officers used pepper spray to disperse a small group of protesters who had obstructed traffic for hours by sitting in the middle of a busy road, kindling a nationwide debate about use of force by police. Ohisalo on Tuesday wondered publicly what had made the demonstration different enough from previous ones to justify the approach.

The National Police Board in its response refers to an account of the sequence of events provided by Helsinki Police Department. The account drew attention not only to the traffic obstruction caused by the protesters, but also to the danger they put themselves and the responding officers in by sitting in the middle of a busy road.

Helsinki Police Department pointed out that pepper spray was not used until its officers had for hours sought to use more lenient measures, such as instructions, requests and orders, to clear the road, to no avail. Physically carrying the protesters to the footpath had similarly failed to put an end to the demonstration and traffic obstruction.

The obstruction had lasted for three hours by the time the officers began to consider using pepper spray, according to Helsinki Police Department. The officer in charge of the operation approved the use of pepper spray after concluding it was the most lenient forcible measure to disperse the protesters. The decision was made at approximately 7pm, four hours after the scheduled end of the demonstration.

“There were no resources to transport every person who neglected to comply with police orders,” it added. “Carrying or unlocking protesters who had chained themselves to each other could have caused physical injuries.”

Prior to using the spray, the officers warned the protesters of the decision to use the spray and gave them five minutes to vacate the road.

The officers used the spray on the protesters three times and monitored its effects after each time, seeing a handful of protesters leave the road and, finally, the group that had chained itself together open the locks.

“After using the spray, the protesters were removed from the road and the removed protesters did not return,” the account reads.

Helsinki Police Department concluded that the pepper spray had the desired effect.

The National Police Board reminded in its report that it is the duty of police to safeguard not only the right to protest, but also the rights of other citizens. The officers controlling the demonstration, it highlighted, sought to make sure they did not limit anyone’s freedom of assembly needlessly throughout the operation.

Pepper spray was thereby a warranted forcible measure to relocate the protesters, break the resistance and clear the traffic obstruction.

While the National Police Board acknowledged that the illegal but peaceful approach taken by the protesters requires police officers to align their response with the peaceful nature of the incident and demonstrate a degree of patience and tolerance, the officers can resort to forcible measures to break the resistance even if they are not subjected to violence, threats or aggression.

The demonstration and events surrounding it are being examined also at the office of the Prosecutor General and Parliamentary Ombudsman.