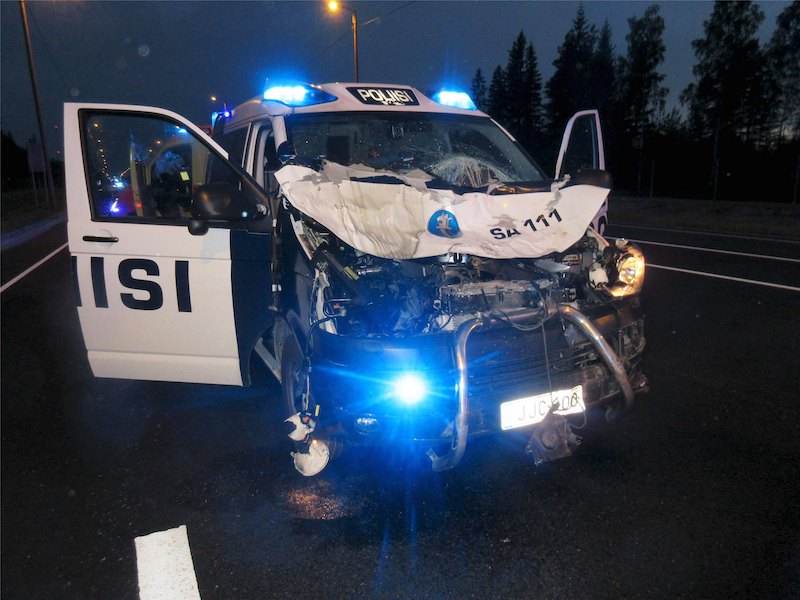 File photo of police car after collision with a moose in Finland. / Lehtikuca

The risk of colliding with an elk or deer increases by approximately 40% in the autumn months.

The coming hunting season and dark evening conditions increase your risk of colliding with an elk or deer. Statistics from Pohjola Insurance show that nearly 40 % of all yearly animal collisions occur between October and December.

Most animal collisions involve elk and deer, and the deer population in particular has grown rapidly in recent years.

This has also increased the number of traffic incidents, especially in Southern Finland, where most driving takes place.

Statistics from Pohjola Insurance show that the likelihood of colliding with an elk is greatest in South Savo, Lapland, Kainuu, South Ostrobothnia, and North Karelia.

- Last year, the average compensation for animal collisions was about 2 400 euros, which is nearly 30 % higher than in normal collisions, says Kristian Hiljander, Director of Vehicle Insurance at Pohjola Insurance.

Elk collisions cause the most damage, and can even result in personal injuries. The risk of colliding with an elk is highest at dawn or dusk. The coming hunting season, which is set to begin on 10 October, will increase the migratory habits of the elk population in particular.

Use the Porokello app when driving in Northern Finland

A fifth of all reindeer collisions occur in November, resulting in vehicular damage and, in most cases, the death of the animal. At worst, they can even cause personal injuries.

If you are planning to drive in Northern Finland, we recommend downloading the Porokello app, which will help you to avoid any reindeer spotted in the area. The Porokello app has helped significantly reduce the number of reindeer collisions in the region.

Drive during the day, pay attention to the road, and reduce your driving speed

Caution and anticipation play a significant role in the prevention of collisions.

- Pay attention to the signs on the road, and reduce your driving speed whenever you enter an area that has been marked with an elk warning sign, or if you spot any hunters. Reducing your driving speed will give you more time to react to any sudden situations and, should a collision occur, reduce your injuries. The best way to avoid collisions is to drive during the day and keep your eyes on the road. If you need to drive in the dark, use your high-beam headlights as often as possible, Kristian Hiljander advises.

In the event of an elk collision, you must warn other drivers of what has happened by placing a warning triangle and turning on your hazard warning lights. All elk and deer collisions must be reported to the emergency response centre, even if no people were injured.

Which insurance will cover an animal collision?

The animal collision cover included in Pohjola Insurance’s comprehensive motor vehicle insurances will reimburse any vehicular losses caused by a collision with an animal. In the event that the losses were caused by an effort to avoid colliding with an animal, the losses can only be compensated under the Collision Cover included in Pohjola’s Super, Standard and Maxi Motor Insurance. Any personal injuries are always reimbursed under motor liability insurance.