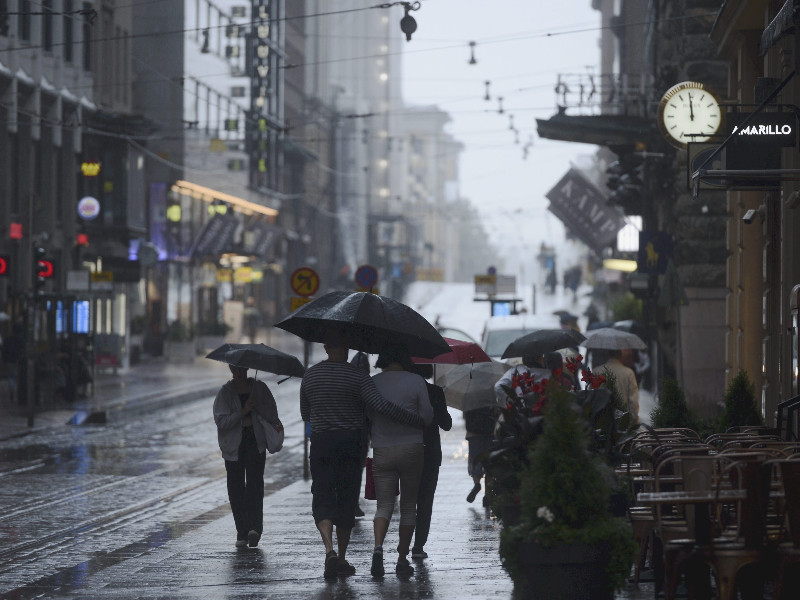 Pedestrians in the rain on Aleksanterinkatu in Helsinki on 29 July 2020. (Olivia Ranta – Lehtikuva)

MAYOR OF HELSINKI Jan Vapaavuori (NCP) on Wednesday delivered a stern message to young people about the importance of following the instructions adopted to limit the spread of the new coronavirus.

“I’m urging you to follow all the instructions, for real,” he stated in a news conference broadcast on the website of the City of Helsinki.

“Using face masks on trains, for example, may not feel like a big thing, but it can be decisive in the big picture.”

The Finnish Institute for Health and Welfare (THL) reported earlier this month that under 30-year-olds presently represent the largest share of new coronavirus cases in Finland. The situation is the same in the Finnish capital, with infections regularly being traced back to settings such as bars, nightclubs and student parties, according to Vapaavuori.

“You can say that the events organised by students have generally taken safety measures fairly well into consideration. But the focus has slipped at after parties and in bars,” he said, reminding that unless students and young people start being more careful, the city may have to resort to firmer restrictions.

“Unless you’re careful, it may be that someone closes the bars.”

Vapaavuori estimated that the epidemic is presently in “some sort of a, fairly clear, stage of acceleration” in Helsinki: the seven-day total of coronavirus infections more than doubled from the previous seven-day period to 124, with the two-week incidence rising to 27 cases per 100,000 inhabitants.

Schools and kindergartens have contrastively not been a major source of infections in the city: only seven primary schools and no kindergartens reported exposures to the virus in the past seven days, according to the mayor.

“What’s noteworthy is that there haven’t been any further infections. Schools aren’t the biggest cause for concern right now,” he said, expressing his gratitude to school and kindergarten staff.

The City of Helsinki has begun updating a list of schools, kindergartens and other education institutions that have detected coronavirus infections or exposures in the past seven days.