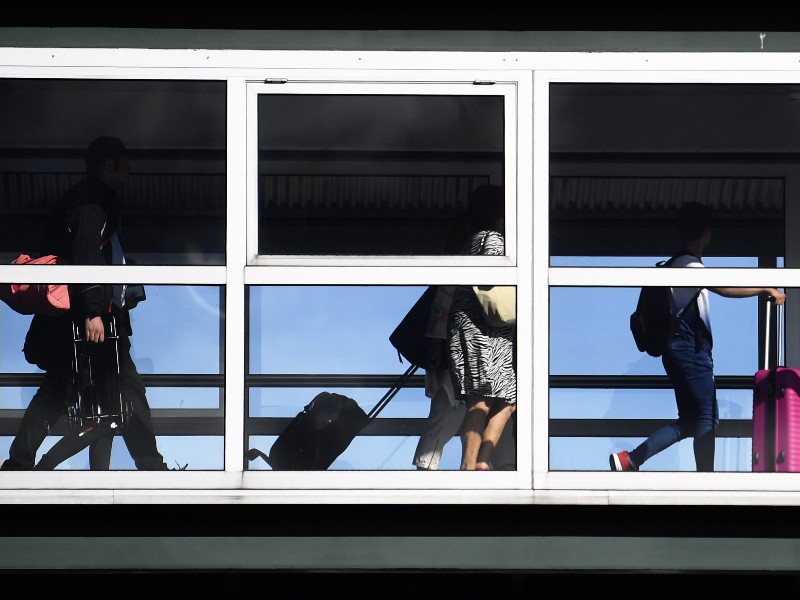 Passengers hauling luggage across a boarding bridge to board a ferry bound for Tallinn, Estonia, in Helsinki on 6 July 2020. (Vesa Moilanen – Lehtikuva)

LEISURE TRAVELLERS from Estonia and Sweden will soon be greeted with instructions to quarantine upon their arrival in Finland, YLE and Helsingin Sanomat revealed on Tuesday.

Both Estonia and Sweden have reported over 25 coronavirus cases per 100,000 inhabitants in the past two weeks, warranting their inclusion on a list of countries that are subject to internal border controls maintained by the Ministry of the Interior.

Most non-business passengers from countries on the list are asked to observe a two-week quarantine after arriving in Finland.

Estonia and Sweden reported 33.59 and 36.0 cases per 100,000 inhabitants, respectively, between 9 and 23 September, according to the situation dashboard of the European Centre for Disease Prevention and Control (ECDC).

The discussion about travel restrictions was re-kindled earlier this week by Urmas Reinsalu, the Estonian Minister for Foreign Affairs. Reinsalu told Estonian Public Broadcasting (EER) that Finland is poised to reinstate restrictions for non-business travellers from Estonia.

“His interpretation is right,” Kirsi Pimiä, the permanent secretary at the Ministry of the Interior, confirmed to YLE. “If you make a holiday visit to Tallinn, the two-week quarantine recommendation will come into play.”

The 25-case limit was exceeded in most countries in the European Union and European Economic Area on Monday. The Finnish Institute for Health and Welfare (THL) had only seven countries on its list of so-called green countries: Cyprus, Latvia, Lichtenstein, Lithuania, Poland, San Marino and Vatican. The other green countries included Australia, Japan, New Zealand and South Korea.

THL reviews the situation every Monday.

The Finnish government will make a final decision on the restrictions based on the recommendation of officials on Thursday. The restrictions would enter into effect on Monday, 28 September.

YLE and Helsingin Sanomat both reminded that the restrictions will apply primarily to non-business travellers. Passengers from Estonia and Sweden, for example, will not be instructed to quarantine if the reason for their visit is business or the daily interaction of communities spanning across the border, provided that the epidemiological situations on both sides of the border are “roughly comparable”.

The Finnish government is currently drafting the legislative amendments required for transitioning to its new testing-based entry protocol. The incidence-based limit for border controls is set to remain at 25 cases per 100,000 inhabitants also for the transition period between 1 October and 22 November, wrote Helsingin Sanomat.