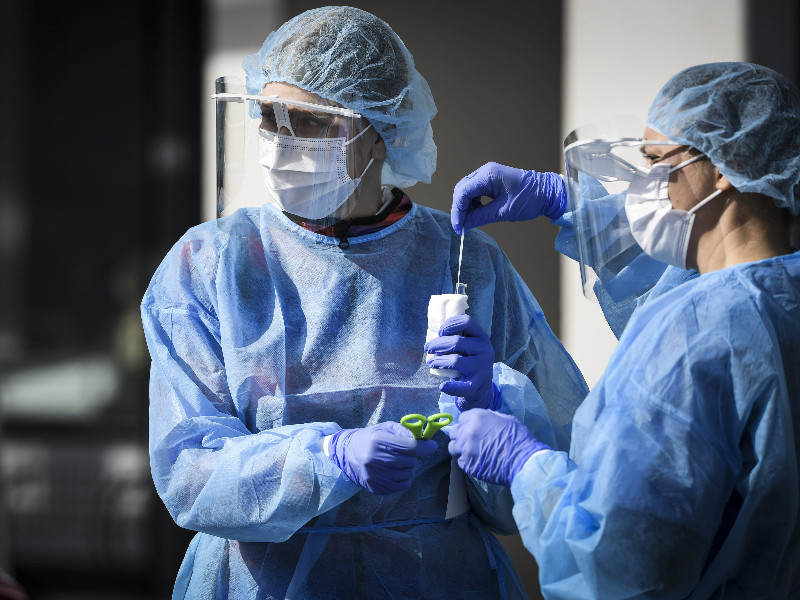 Medical professionals at a drive-in coronavirus testing site in Vantaa on 12 May 2020. (Emmi Korhonen – Lehtikuva)

THE NUMBER of laboratory-confirmed coronavirus infections jumped by 149, from 9,046 to 9,195, in Finland between Monday and Tuesday, according to the Finnish Institute for Health and Welfare (THL).

THL on Tuesday pointed out that that 135 of the infections are new, meaning they were detected in the past two weeks.

“It’s a record figure, there’s no denying that. The situation now is that the case numbers are growing steadily but surely,” Mika Salminen, the head of health security at THL, commented on the daily increase – the highest since 6 May – to Helsingin Sanomat.

THL, he confirmed to the newspaper, will issue a new recommendation on the use of face masks this week in response to the acceleration of the epidemic in some areas. The use of masks is to made advisable in indoor spaces such as schools and shopping centres, according to STT.

Also the longer-term statistics indicate that the number of infections is on an upward trajectory. THL reported that a total of 754 infections were detected during the latest two-week monitoring period between 6 and 19 September, representing a surge of 391 from the period between 23 August and 5 September.

The two-week total peaked at 1,932 in the spring, according to Helsingin Sanomat.

The incidence of the new coronavirus has similarly increased in the past two weeks, more than doubling from 6.6 cases per 100,000 inhabitants between 23 August and 5 September to 13.7 cases between 6 and 19 September.

The death toll from the virus crept up by two to 341, while the number of patients in hospital care crept up by three to 19 between Monday and Tuesday.

THL reminded that the figures from the latest two-week monitoring period may be affected by delays in reporting, cautioning against drawing any firm conclusions based on a recent increase or decrease in infections.

Policy makers across party lines expressed their concern about the up-tick in coronavirus infections on Tuesday.

Osmo Soininvaara (Greens) warned that unless people change their behaviour, the number of new infections will grow twofold in 25 days and tenfold in little less than three months.

“The trend is unfortunate. Unless people change their behaviour, it’ll be a big hassle in December,” he said. “Unless we manage to reduce the transmissibility, we’ll be close to last spring’s figures in December.”

Minister of Defence Antti Kaikkonen (Centre) highlighted that the epidemiological situation is developing in an alarming direction, despite remaining one of the best in the western world.

“We mustn’t give in to coronavirus fatigue,” he pleaded. “Let’s protect one another by remembering the importance of safe distances, face masks, hand washing and other precautionary measures. That’s how we can also reduce the need to bring new restrictions into our daily lives.”

Minister of Family Affairs and Social Services Krista Kiuru (SDP) told Demokraatti that the situation is disconcerting but declined to comment on measures the government may be considering to address it.