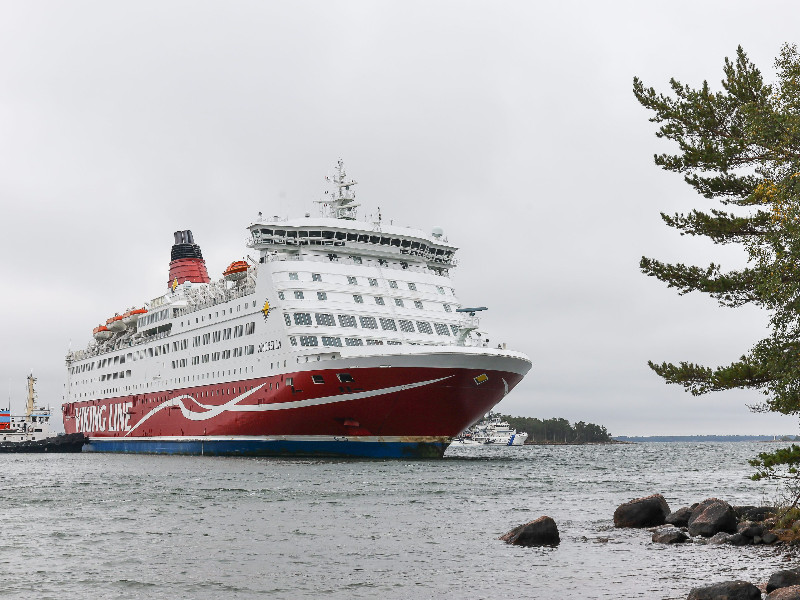 Viking Amorella was grounded outside the island of Järsö in Åland on Monday, 21 September 2020. The seabed at the site is soft and muddy, meaning the ferry should sustain no additional damage when towed to port. (Niclas Norlund – Lehtikuva)

PASSENGERS EVACUATED from Viking Amorella on Sunday may have to wait for their luggage for several days, reports YLE Åboland.

The passenger ferry remains grounded outside the island of Järsö in Åland Islands, Finland, after running aground south of Långnäs at 12.35pm on Sunday. All of the roughly 200 passengers on board and part of the crew were evacuated from the ferry during the course of Sunday.

Almost 50 members of the crew stayed on the vessel to analyse the technical onboard equipment.

Jan Hanses, the CEO of Viking Line, stated to Helsingin Sanomat on Monday that the shipping company has held a meeting to review the sequence of events leading up to ferry accidentally having ground contact.

“It appears that the vessel got more than one hole in the accident,” he revealed.

What caused the ferry to run aground remains unknown.

“We’re not going to speculate about the reason. We’ll have to continue examining and studying things before we can know the reason. But these [kinds of accidents] are rare,” Johanna Boijer-Svahnström, the director of public relations at Viking Line, stated to YLE.

Roughly 40 lorries and 40 passenger vehicles, as well as other cargo such as paper, timber and steel, remain aboard the ferry. The next step may be to tow the ferry and cargo to Åland Islands, according to Boijer-Svahnström

“A lot of this will depend on the towing. It’s possible that we unload the cargo in Långnäs. A second possibility is that the cargo moves with the ferry to Turku Repair Yard in Naantali,” she said.

The repair yard is where the vessel will also be examined by the Safety Investigation Authority (OTKES).

Boijer-Svahnström pointed out that the incident has not caused major transport disruptions, as the ferry will be replaced on the route between Turku and Stockholm with MS Gabriella. “This isn’t a dangerous route. All our ships pass through this,” she added.