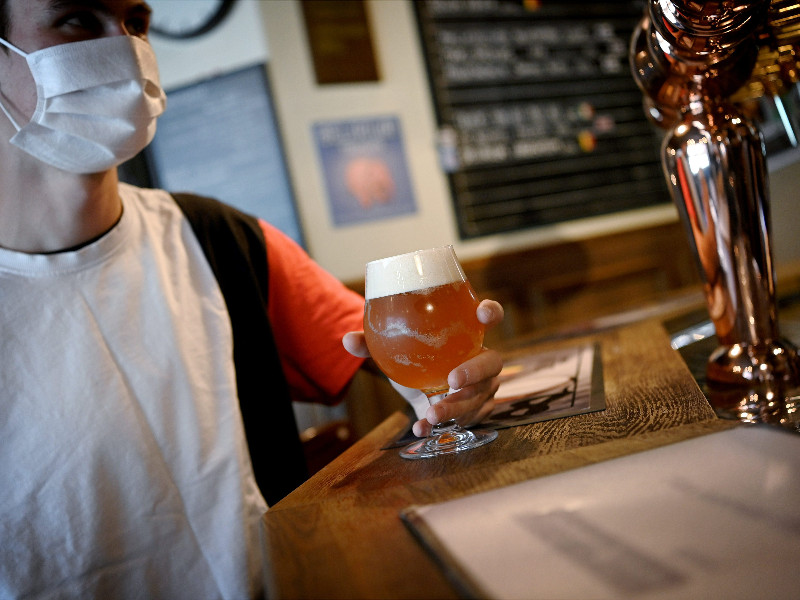 A patron wearing a face mask at the counter of a pub in Helsinki on 19 August 2020. (Antti Aimo-Koivisto – Lehtikuva)

RESTRICTIONS to the late-night sales of alcohol could be warranted also in Finland, estimates Lasse Lehtonen, the director of diagnostic services at the Hospital District of Helsinki and Uusimaa (HUS).

Lehtonen on Saturday told Iltalehti and YLE that a fairly large proportion of new coronavirus infections in the country have been linked to nightlife, restaurants and parties.

“I’m hoping for restrictions to late-night serving of alcohol,” he stated on Twitter on Saturday. “The key for managing the coronavirus epidemic is our ability to intervene timely in settings where the infections are spreading. In Finland, those happen to be restaurants late at night.”

He underscored that the restrictions are not necessitated by the carelessness of restaurants, but rather by the rate and pace of infections in different parts of the country and the behaviour of people late at night.

Estonia in August prohibited bars, nightclubs, restaurants and hotels from serving alcohol between midnight and 10am, citing concerns about the spread of the new coronavirus.

“A similar restriction wouldn’t be a bad idea also in Finland,” said Lehtonen.

The Finnish Institute for Health and Welfare (THL) has reported that the number of laboratory-confirmed coronavirus infections jumped by 64 to 8,922 between Friday and Saturday. The number of new infections was over 300 higher between 3 and 16 September than between 20 August and 2 September.

The virus had a two-week incidence of roughly 11 cases per 100,000 inhabitants.

THL on Thursday expressed its concern about the increase in new infections over the past days, saying several hospital districts have detected a number of domestic infection clusters and chains of infection.

The virus is presently estimated to have a reproduction number of 1.20–1.25 in Finland.