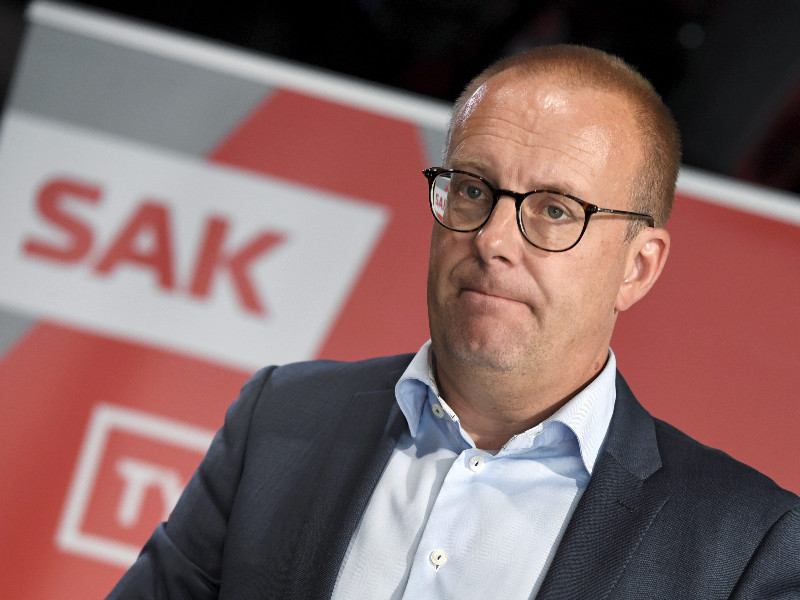 The Central Organisation of Finnish Trade Unions (SAK) is not prepared to boost employment among the over 55-year-old population by cutting social security or the income of job seekers, according to chairperson Jarkko Eloranta. (Markku Ulander – Lehtikuva)

THE CENTRAL ORGANISATION of Finnish Trade Unions (SAK) has welcomed the additional funds allocated for employment policy in the newly released budget, saying they enable authorities to support unemployed job seekers as individuals.

SAK on Wednesday also said it is ready to sit down with other labour market organisations to discuss measures to promote employment among over 55-year-olds.

The measures, however, must not include negative changes to the social security system or the income of unemployed job seekers, it stressed. “We are heading into the negotiations to look for ways to strengthen the work ability of the elderly, their job motivation and job security,” stated Jarkko Eloranta, the chairperson of SAK.

Finnish Energy, in turn, lauded the government for pushing forward the lowering of the industrial energy tax, saying it is a concrete step toward reducing emissions from industry. It was not as convinced about the impact of doubling the tax on peat as part of the tax reform that is set to create 105 million euros in revenue.

“Doubling the tax on peat will not benefit the climate goals, because the use of peat has been decreasing with the current steering,” said Jari Kostama, the head of energy production and district heating at Finnish Energy.

The energy tax reform will nonetheless promote the competitiveness of industries by improving their operating environment and renewal capacity, according to the Finnish Industrial Union.

“In our view, the investments in the operating preconditions of industries are sending a long-awaited message: the government is committed to strengthening the competitiveness of export industries. The decisions are key steps in the right direction,” said Riku Aalto, the head of the Industrial Union.

Many economists and employer representatives were not as excited about the measures announced on Wednesday.

Aki Kangasharju, the chief executive of Etla Economic Research, expressed his disappointment with the outcome of the budget session, highlighting that all of the decisions on employment measures will increase spending.

Sanna Kurronen, an economist at the Finnish Business and Policy Forum (EVA), suggested the government turned to a variety of proven ways to duck responsibility and postpone critical decisions – namely, setting up task forces and committees, delegating decisions to labour market organisations, and launching municipal trials.

Service Sector Employers (Palta) similarly voiced its disappointment with effective and proven measures to bolster the ranks of the employed.

“The measures presented by the government are primarily insufficient. It is now key that the continuing preparatory work on employment measures has clear goals and produces results quickly,” told Martti Pykäri, the chief economist at Palta.

The Confederation of Unions for Professional and Managerial Staff in Finland (Akava) said the government should have invested more both in consolidating the foundation for economic and employment growth, and in supporting research and development efforts.

“The purchasing power of wage earners is at risk of declining next year. We believe income taxes should have been lowered by making cuts in income tax bases,” said Sture Fjäder, the chairperson of Akava.

Mikael Pentikäinen, the managing director of the Federation of Finnish Enterprises, lamented that the government fell short of expectations in terms of revamping unemployment security, promoting workplace bargaining and phasing out the unemployment path to retirement.

“It did make decisions on these but stopped short of making reforms, despite the pressing need,” he said.