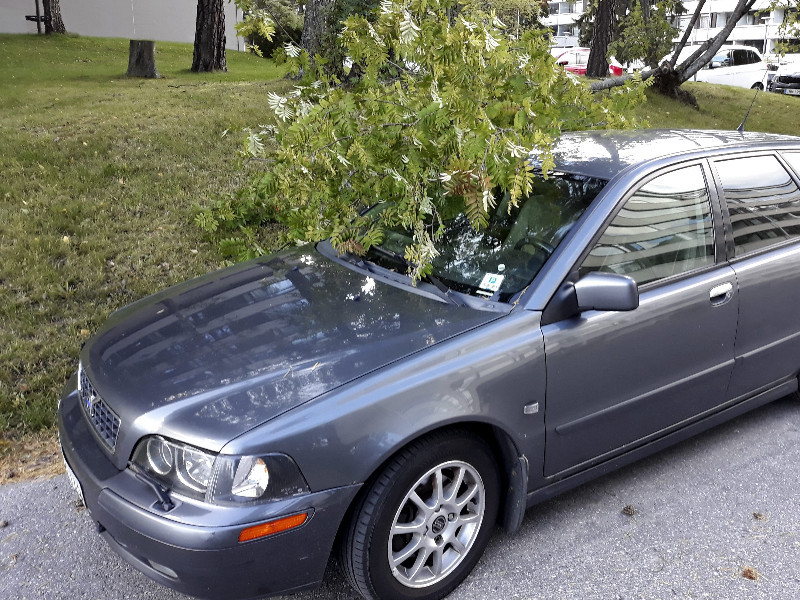 A tree fell on a car in Laajasalo, Helsinki, on 10 September 2020. The Finnish Meteorological Institute (FMI) is encouraging car owners to park their cars away from falling trees, preferably in garages. (Teemu Salonen – Lehtikuva)

That is what could be in store as a fierce storm – forecast to be the fiercest of the year thus far – hits widespread areas in southern parts of Finland between Wednesday and Thursday, according to the Finnish Meteorological Institute (FMI).

“The storm is unusually strong for this season. Typically low-pressure storms as strong as this take place later in the autumn and winter. Trees still have their leaves and the ground has yet to freeze in land areas, making this storm more impactful than winter storms,” Ville Siiskonen, a meteorologist on duty at FMI, commented on Tuesday.

FMI has issued a strong-wind warning to all land areas south of Jyväskylä. The storm is also expected to bring over 40 millimetres of rain in some areas and drag down temperatures to 6–9°C.

Greater Helsinki is set to witness the worst of the storm in the morning hours of Thursday, according to Helsingin Sanomat. Winds, in turn, are set to peak at over 20 metres per second in the afternoon.

“It may be a good idea to avoid going outside for no reason,” Iiris Viljamaa, a meteorologist on duty at Foreca, stated to Helsingin Sanomat.

Foreca’s wind map suggests could peak as high as over 32 metres per second in areas off the western coast of Finland.

FMI has advised people to prepare for the storm by cancelling travel plans, stocking up on drinking water, charging mobile phones and flashlights, securing or storing any garden furniture, and closing all doors and windows. When the storm hits, people are advised to stay indoors and away from windows, refrain from trying to fix any property damage and avoid using lifts in case of power outages.