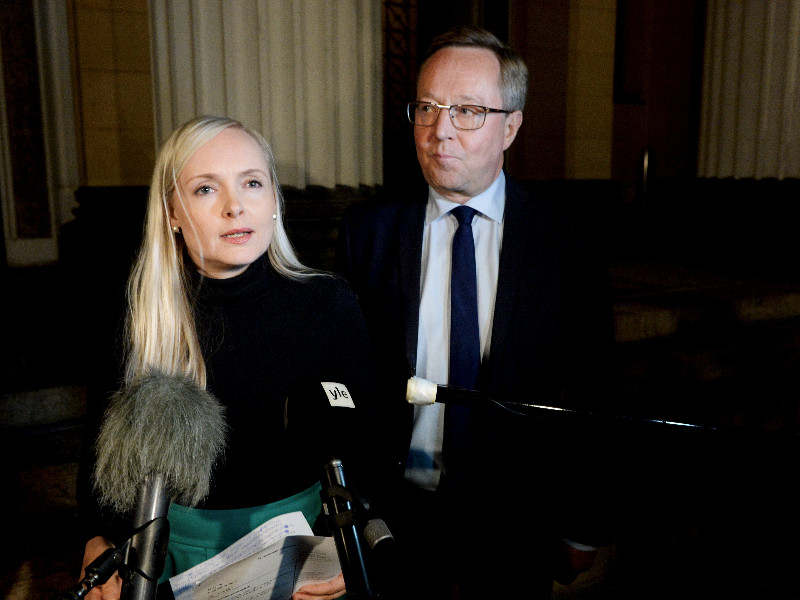 Minister of the Interior Maria Ohisalo (Greens) and Minister of Economic Affairs Mika Lintilä (Centre) spoke to the media on the steps of the House of the Estates in Helsinki on Thursday, 10 September 2020. (Mikko Stig – Lehtikuva)

THE FINNISH GOVERNMENT on Thursday decided to scale down its restrictions on cross-border travel.

Helsingin Sanomat revealed yesterday that passengers from countries that reported 25 or fewer coronavirus infections per 100,000 inhabitants in the past two weeks will not be required to observe a quarantine after arriving in Finland as of Monday, 14 September.

The government was previously recommending that people avoid unnecessary travel to and observe a two-week quarantine after returning from countries with eight or more cases per 100,000 inhabitants in the past two weeks.

The decision makes travel possible from countries such as Denmark, Norway and Sweden.

“The threshold of 25 is relatively restrictive for many countries, but this is the government’s shared desire at this point in time,” Minister of the Interior Maria Ohisalo (Greens) stated outside the House of the Estates in Helsinki on Thursday.

The European Union has encouraged its member states to keep their borders open to countries with fewer than 25–50 coronavirus cases per 100,000 inhabitants.

Finland will not, however, lift internal border controls until its new testing-based entry model and the necessary legislative revisions have been finalised, according to Helsingin Sanomat. The government will shed further light on the model in a press conference scheduled for 11am on Friday.

Minister of Transport and Communications Timo Harakka (SDP) commented yesterday that he is delighted with the decision especially for Sweden. “I’m especially glad that we can resume normal interaction with Sweden,” he said.

Harakka said the Ministry of Transport and Communications is drafting a bill that will oblige passengers to provide proof of a negative coronavirus test before entering Finland. The obligation, he added, would apply to passengers from countries where the coronavirus has a higher incidence than 25 cases per 100,000 inhabitants.

Most Baltic and Nordic countries would be exempt from the obligation, according to him.

“I’m sorry that it took so long, but better late than never,” he said.

Lintilä drew particular attention to Finnair: “Finnair will now return to the competitive market where it has been with its European competitors.”