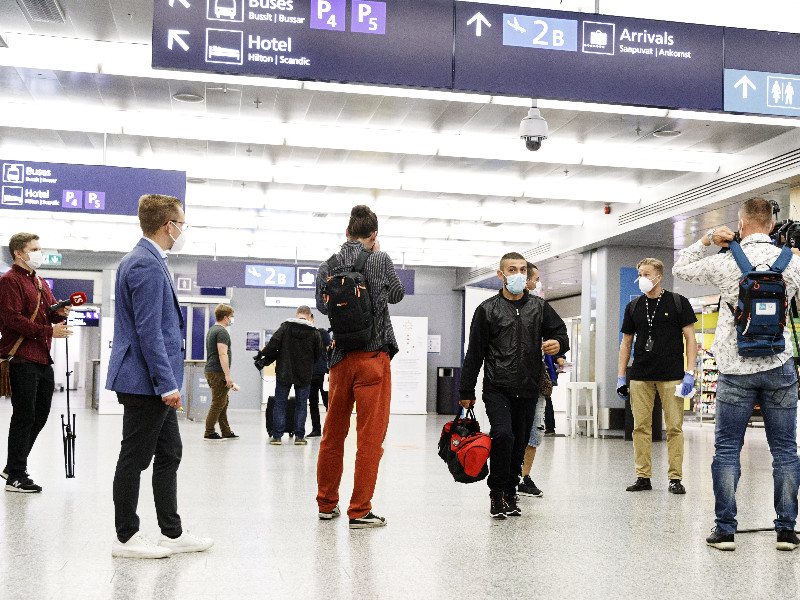 Arriving passengers and members of the media at Helsinki Airport on 11 August 2020. (Roni Rekomaa – Lehtikuva)

THE NUMBER OF PASSENGERS at Helsinki Airport plummeted by 87 per cent year-on-year to around 270,000 in August.

Kimmo Mäki, the managing director at Finavia, on Tuesday said passenger numbers began to grow noticeably in July but the growth was thwarted by the re-introduction of strict travel restrictions by the government in mid-August.

“Our estimate suggests that the autumn is looking even bleaker than August,” he commented in a press release.

Mäki pointed out that connections that are crucial for the national economy as enablers of not only tourism but also export promotion trips and other forms of business travel are all but completely non-existent.

“Pretty much no connections are being offered,” he told.

Helsinki Airport also recorded a dramatic year-on-year drop of 93 per cent in one its most important passenger segments – transit passengers – and a fall of 54 per cent in the volume of freight in August.

Finavia, the state-owned operator of airports in Finland, on Tuesday reported that last month its airports recorded a year-on-year decline of 85 per cent in passenger numbers to 328,600. The number of passengers that passed through the airports during the eight seven months of the year stood at 5.6 million, signalling a drop of 68 per cent – or almost 12 million – from last year.

Mäki said Helsinki Airport could be at risk of losing its status as a popular transit airport if the crisis set off by the coronavirus pandemic drags on.

“We cannot afford that. With the passenger numbers this low, Finland is losing jobs and revenue. Air travel has enormous multiplier effects on the tourism, service and construction industries, among others,” he said.

Strict travel restrictions have already slowed down the recovery of air travel in Finland compared to the rest of Europe. Passenger numbers elsewhere on the continent were on average 65 per cent lower than last year in August.

“Travelling more freely than currently could be possible in the coronavirus age, and it could be allowed to a certain extent by taking into account the risks and acting responsibly,” said Mäki.