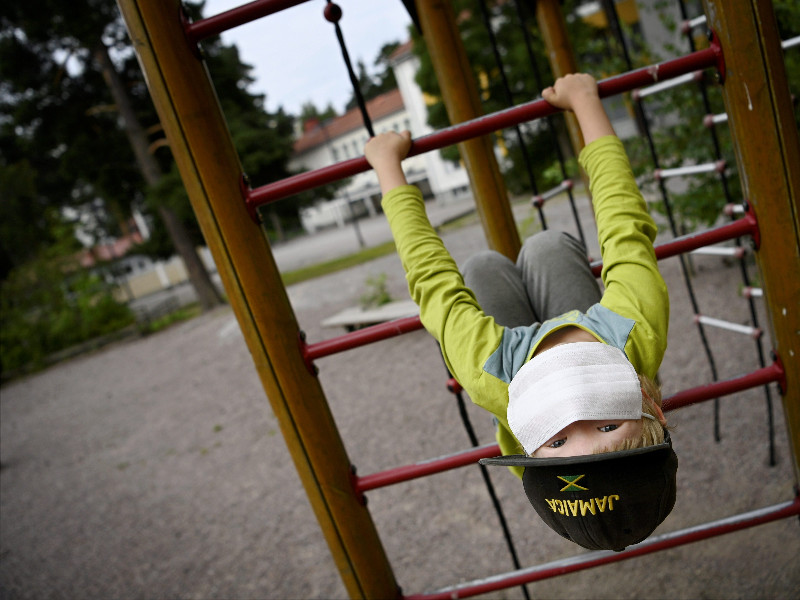 A child wearing a face mask played in a school yard in Helsinki on 12 August 2020. (Antti Aimo-Koivisto – Lehtikuva)

CITIES in the Finnish capital region last week reported a number of new coronavirus infections that necessitated the issue of quarantine orders to pupils and staff at schools.

The City of Helsinki on Friday announced a partial transition to remote learning at Kannelmäki Comprehensive School, making the primary school the first in the city to alternate between in-person and remote teaching this autumn.

The Helsinki Media Arts Upper Secondary School and Vuosaari Upper Secondary School will switch to remote teaching for the next two weeks after 37 students and four staff members became exposed to the coronavirus, according to a press release issued by the city on Sunday. The decision was made partly in an attempt to ensure the ongoing matriculation exams can be completed without disruption.

Quarantine orders, meanwhile, were issued at nine education institutions in the capital region, including to 96 students Etu-Töölö Upper Secondary School.

YLE on Friday reported that in the past three weeks a total of 4,000 people have been exposed to the new coronavirus in the Hospital District of Helsinki and Uusimaa (HUS). At least 1,700 of the exposures, it added, have been linked to education institutions.

Laura Juvonen, the chief physician of infectious diseases at the City of Vantaa, estimated that the share of exposures linked to education institutions is not particularly high.

“There’ve been quite a few mass exposures. They happen in public spaces, restaurants, hobbies, public transport – in places where it’s impossible to find out who exactly have been exposed to the virus. We’re able to identify the exposed fairly well when it comes to schools,” she said to the public broadcasting company.

Vantaa has reported exposures at two schools during the autumn term, but the number is much higher in Espoo (8) and Helsinki (over 10).

Liisa Pohjolainen, the executive director of education at the City of Helsinki, confirmed to YLE that schools in the city have registered a notable up-tick in the number of infections and exposures in recent weeks but added that the overall situation is not especially alarming.

“I can’t provide the exact number. A couple of hundred have been exposed in schools during the entire autumn. We’ve got around 45,000 primary-school pupils and around 25,000 upper-secondary students, meaning we’re talking about a relatively limited number of pupils,” she reminded.

A spokesperson at the city’s social services and health care division said a total of 771 people – 690 pupils and 81 staff – have been exposed to the virus this autumn.