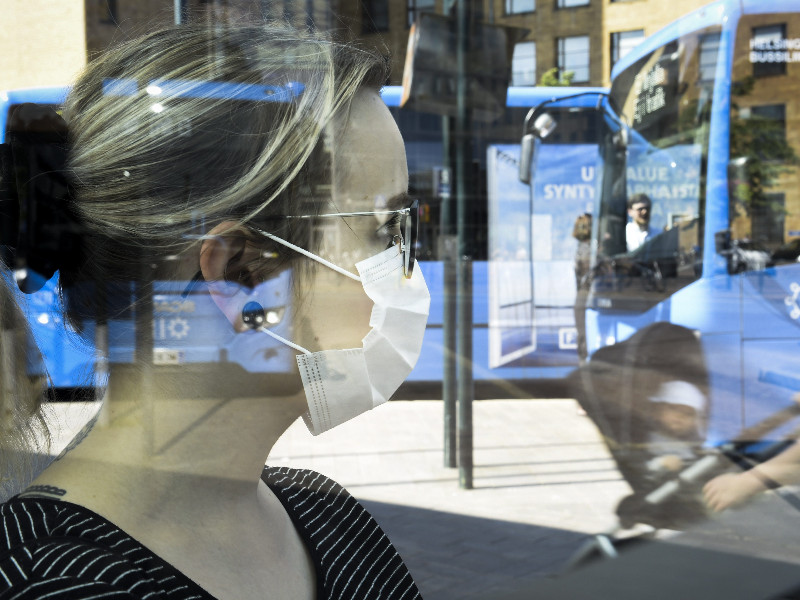 A woman covered her mouth and nose with a mask on a bus in Helsinki on 26 June 2020. (Emmi Korhonen – Lehtikuva)

MIKA SALMINEN, the director of health security at the Finnish Institute for Health and Welfare (THL), says THL intends to recommend that Finland encourage the use of face coverings in public spaces and on public transport to slow down the spread of the new coronavirus.

“Yes, it’s very possible it’ll be issued. We’ll talk about this immediately at the start of the week,” he revealed last weekend in interviews with MTV and YLE.

Salminen declined to specify whether the institute will also ask the government to issue the recommendation, reminding that the number of new coronavirus cases has not increased at an alarming pace in Finland. The need for the recommendation, he explained, stems rather from the overall situation and evidence of a second wave of infections worldwide.

“The recommendation is a good measure to prevent a second wave of coronavirus cases,” commented Lasse Lehtonen, the head of diagnostics at the Hospital District of Helsinki and Uusimaa (HUS).

Maarit Leinonen, an adjunct professor of epidemiology at THL, stated that the recommendation was expected.

“Masks won’t be necessary in the forests of Kuusamo. All recommendations and restrictions should be targeted under the act on communicable diseases based on the epidemiological situation to avoid having to shut down the country again. I also believe regions are better equipped to react quickly,” she tweeted.

The availability of masks was a slight concern for some.

“A smart move at this point,” said Teemu Ihalainen, a research fellow of cellular biophysics at Tampere University. “Hopefully there’ll be enough good masks for everyone who needs them. The situation is presumably better than last spring in terms of availability.”

Salminen and Markku Tervahauta, the director general of THL, on Saturday urged Finland to take action to prepare for the re-acceleration of the coronavirus epidemic.

“Finland is currently in a better situation than many other countries. However, there is no reason to be satisfied and become passive. The pandemic is still continuing globally, and setbacks – including serious ones – are possible if we forget about the threat caused by the virus,” they noted in a guest contribution to Helsingin Sanomat.

“The changing of seasons will gradually increase the number of respiratory infections, and this seasonal variation can increase the risk of the coronavirus epidemic accelerating also here.”

A group of researchers last week published a study indicating that the use of face coverings reduces the risk of contracting the coronavirus by 33 per cent. Such a preventive impact is statistically significant.

The Ministry of Social Affairs and Health reported earlier this summer, citing the same research data, that although face coverings can theoretically prevent their users from transmitting the virus to others, they do not protect the users against the virus.

The Finnish government has thus far refrained from issuing a mask recommendation partly because of concerns that it could lead to people slipping from other preventive measures, such as social distancing and hand washing. The research group, however, said there is evidence that the use of face coverings has no impact on compliance with other instructions.