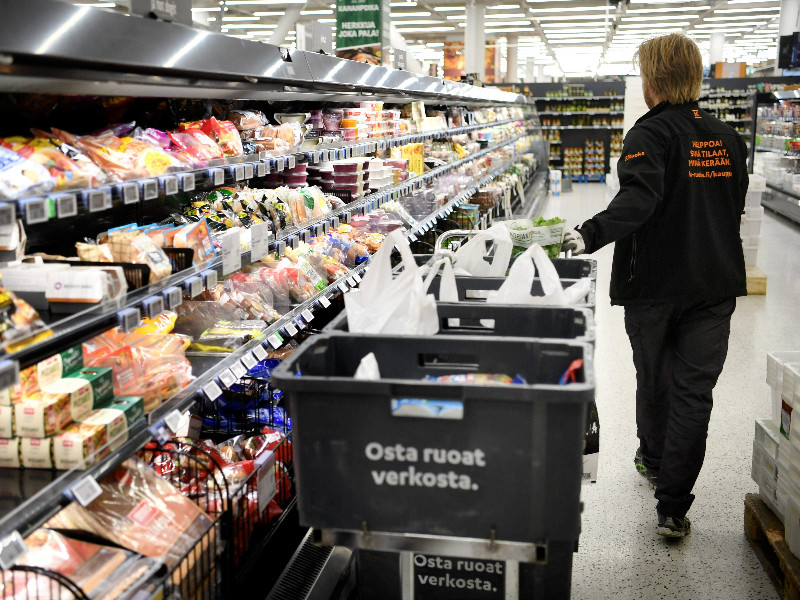 An employee filling the orders of online customers in K-Citymarket Iso Omena in Espoo on 28 April 2020. Kesko says it is prepared to adjust its prices in response to the price reduction campaign of Lidl. (Antti Aimo-Koivisto – Lehtikuva)

LIDL on Wednesday announced it is permanently slashing the prices of hundreds of items in its grocery shops in Finland.

Mikko Forsström, the chief commercial officer at Lidl Finland, stated that the goal of the grocery shop chain is to consolidate its price leadership in the country by offering the most affordable grocery shopping experience.

“The items whose prices will be cut include a variety of products from home-grown to imported ones, from frozen to dry ones. Our catalogue has around 2,500 products, meaning the prices of a ninth of them will be cut. The cuts will be more significant for some items than others, but overall the drop in price level is notable,” he said.

Lidl on Wednesday said the items will include cheese and other dairy products, coffee and other dry goods, and pre-made meals, sweets and chocolate, as well as pet food. The cuts will affect especially the in-store brands of the retailer, which make up the majority of its catalogue.

“We absolutely want to widen our lead over the competitors. The prices dropped a lot when we came to Finland. It’s our impression now that people’s impressions about affordability are no longer a clear-cut. We’re returning to our roots and reminding people why we exist,” outlined Forsström.

He assured that the cuts will not affect the prices paid to food or raw material producers but will be made possible by squeezing the profit margins of Lidl. The campaign is therefore a significant investment for the grocery retailer.

“We are talking about millions. The investment is more than five million and closer to 10 million euros,” he said.

Lidl revealed it postponed the launch of the price reduction campaign due to the coronavirus pandemic in order not to draw people to its shops in great numbers at the peak of the first wave of infections last spring.

“We are monitoring the situation on a daily basis: in the short term, whether there will be a second wave and we are preparing for one.”

Both Kesko and S Group on Wednesday announced they are ready to respond to the price cuts announced by Lidl, according to Helsingin Sanomat.

“Offering an affordable grocery basket is one of the primary duties of a co-operative retailer. We want to hold on to this fundamental promise and act accordingly in the evolving market situation,” stated Sampo Päällysaho, the director of grocery trade at S Group.

Harri Hellman, the director of assortments and pricing at Kesko, reminded that price reduction campaigns can be misleading as price cuts are part of the regular operations of grocery retailers.

“For us, price reductions are completely normal procedures that are usually carried out in the autumn in conjunction with renewing the product catalogue. We’ll be lowering the prices of some 600–700 products also this coming autumn,” he revealed to Helsingin Sanomat.