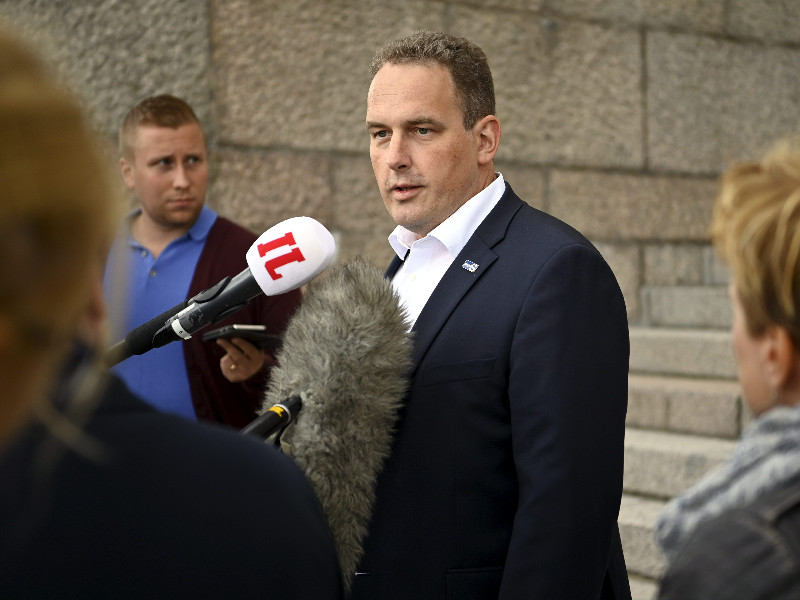 Jani Mäkelä of the Finns Party spoke to reporters outside the Parliament House in Helsinki on Thursday, 23 July 2020. (Antti Aimo-Koivisto – Lehtikuva)

PRIME MINISTER Sanna Marin (SDP) has asked the Finns Party to substantiate its claim that she overstepped her mandate in approving the 750-billion-euro recovery fund finalised by the European Council on Tuesday, 21 July.

The populist opposition party has accused the prime minister of violating the constitution and ignoring the boundary conditions imposed by the Parliament’s Grand Committee.

The Finnish Parliament, it said, should interrupt its summer recess to discuss the recovery fund deal. The request has been rejected by Speaker of the Parliament Anu Vehviläinen (Centre).

“It’s obvious that different parties have different views and opinions on the issue. I’m always prepared to discuss them,” Marin assured on the first day of her summer holiday, on 23 July. “But it’s unfair to make vague suggestions about the process of ministerial duties. You must have something more concrete than suggestions to back allegations as serious as them.”

Jani Mäkelä, a deputy chairperson of the Grand Committee, on Thursday stated that Marin failed to update the committee on the progress made during the negotiations in Brussels between 17 and 22 July.

Marin rejected his allegation by saying she was regularly in contact with Satu Hassi (Greens), the chairperson of the Grand Committee.

Hassi confirmed her statement on Twitter. “This is accurate,” she stated. “The prime minister acted in accordance with the mandate given to her by the Grand Committee. The duty of the committee is to give the government a mandate to negotiate, not to steer the government’s negotiating strategy.”