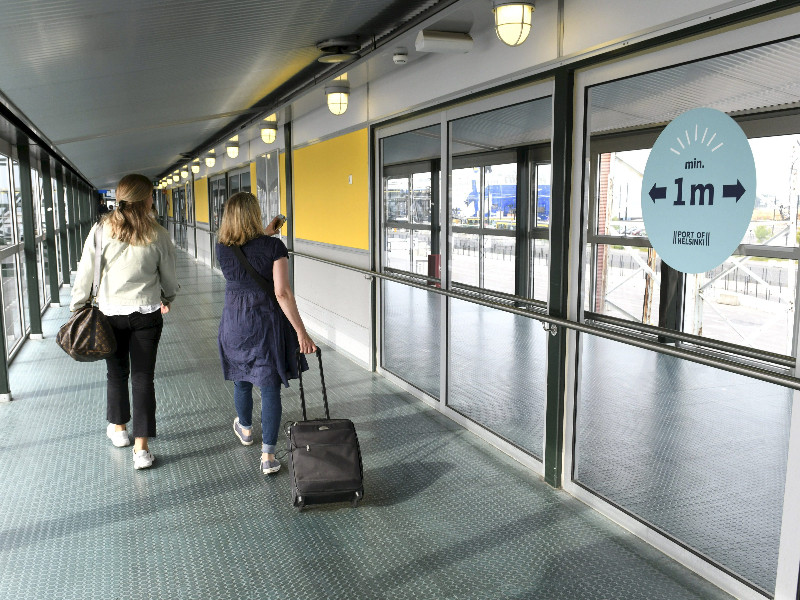 Passengers were instructed to observe social distancing in West Terminal in Helsinki on 21 July 2020. The easing of restrictions on, for example, leisure travel has re-ignited talk about the possibility of a second wave of coronavirus infections in Finland. (Heikki Saukkomaa – Lehtikuva)

TWENTY-FIVE INCIDENTS in which 10 or more people were exposed to the new coronavirus have been detected in the Hospital District of Helsinki and Uusimaa (HUS) in July, reveals Lasse Lehtonen, the director of diagnostics at HUS.

Lehtonen also revealed that 16–45 per cent of the infections confirmed in the district have been successfully traced to their origin in July.

The Finnish Institute for Health and Welfare (THL) on Friday reported that the number of laboratory-confirmed coronavirus infections has crept up by eight to 7,380 in Finland. Fifty-one of the infections were detected over the latest seven-day monitoring period between 15 and 21 July, signalling an increase of 11 from the period between 8 and 14 July.

The virus is currently estimated to have a reproduction rate of 0.55–0.95 in Finland. Its death toll rose by one to 329 between Thursday and Friday.

Although the epidemiological situation remains stable in light of the statistics, the lifting of event, travel and other restrictions has re-ignited public discussion about the possibility of a second wave of infections. Asko Järvinen, the director of infectious diseases at HUS, reminded Helsingin Sanomat on Friday that the spread of the new coronavirus may be subject to seasonal variation, as its other strains tend to be less prevalent in the summer.

“If we’re talking about seasonal fluctuation, it’s possible that the virus will activate as we edge closer to the autumn. No one knows what will happen in the autumn,” he said.

“If we’re unable to get to the bottom of chains of transmission, the virus can spread wider. The pieces are in place for a difficult situation in the worst-case scenario also in Finland, because there’s no vaccination-based protection.”

Järvinen also reminded that the country is better much prepared to face the possible second wave than it was when the virus first began to spread among the population last spring.

“We have a massive tracing machinery ready, a bigger testing capacity and the care system has been set up once. We know how to protect patients in nursing homes, where the risk of death is the highest. We’ve learned and had time to prepare,” he pointed out.

“If the patient numbers do increase, it’s possible we end up in the same situation as, for instance, Stockholm. There the health care system has been overburdened. That’s when deaths will occur also for reasons other than the coronavirus.”

Physicians from HUS estimated last week that a second, possibly worse wave of infections is probable also in Finland. The trio based their assessment on the fact that the easing of various restrictions has not been offset with measures that prevent the virus from spreading in cramped indoor settings such as nightclubs.

“We’re talking about us maybe having plenty of events where a single super transmitter can spread the disease,” summarised Lehtonen.

“Two to three weeks is a realistic delay, meaning we’re now seeing the consequences of restaurant openings. [The consequences of] resuming nightlife will be seen two weeks from now,” he reminded.

“The second wave will probably come if people don’t follow the precautionary measures,” echoed Eeva Ruotsalainen, a deputy chief physician at the epidemiological unit of HUS.

Finnish health care authorities, she added, should recommend that people wear masks in crowded settings such as public transport services in the autumn, as commuters start using the services in highest numbers since February.