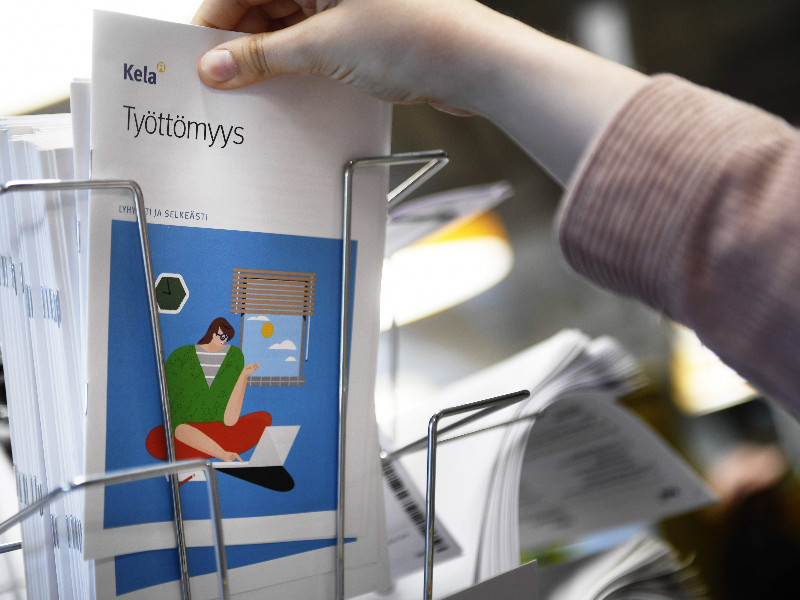 A person examining a brochure about unemployment at a service point of the Social Insurance Institution of Finland (Kela) in Helsinki on 15 June 2020. (Vesa Moilanen – Lehtikuva)

SOME 65,000 unemployed job seekers were not entitled to earnings-related unemployment security for not being members of an unemployment fund in Finland in May, gauges Mauri Kotamäki, the chief economist at Finland Chamber of Commerce.

“The coronavirus crisis has sadly cast the spotlight on a group of people that fall between two stools in the labour market,” he wrote in his analysis of the latest employment data on Tuesday.

“The basic unemployment allowance was paid to 65,000 people in May. These people would have been entitled to an earnings-related benefit as members of an unemployment fund, but now they fell back on basic social security.”

The 33.66-euro basic unemployment allowance is presently paid for five days a week, adding up to 724 euros a month before taxes.

Kotamäki on Tuesday viewed that equality alone is reason to transition to universal earnings-related unemployment security.

“Luckily we are currently in a situation where all parliamentary parties support shifting to universal earnings-related income security. It is now the government’s turn to draw its conclusions and promote the issue. We are at a point where it is down to political will,” he said.

The Central Organisation of Finnish Trade Unions (SAK) and Finnish Confederation of Professionals (STTK) have voiced their reservations, saying advocates of the shift are using it as a pretext to cut unemployment security.

The trend of the unemployment rate stood at 6.7 per cent.