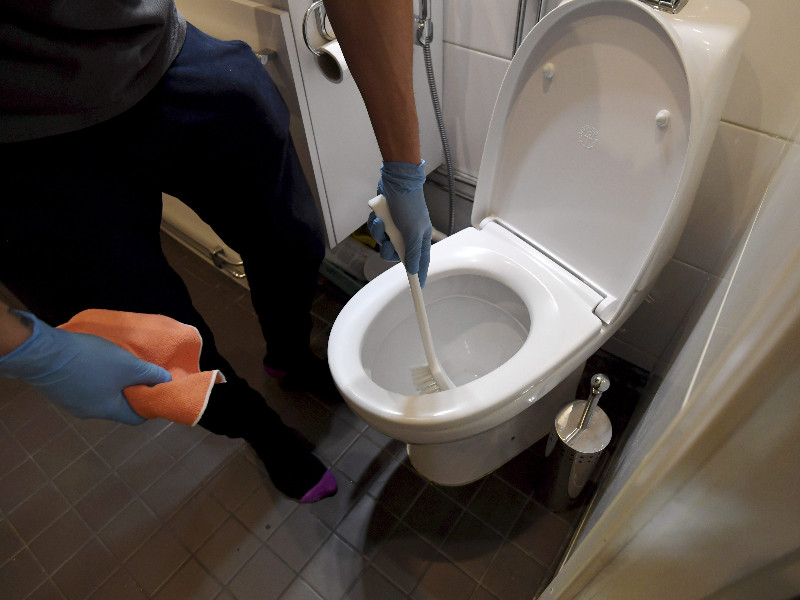 Helsingin Sanomat has cast light on the mistreatment of employees, especially those in a vulnerable position due to their residence status, in the cleaning industry of Finland. (Markku Ulander – Lehtikuva)

A MONTHS-LONG INVESTIGATION by Helsingin Sanomat suggests labour exploitation is widespread and systematic in the cleaning industry in Finland.

Helsingin Sanomat on Sunday revealed that several cleaning service providers have effectively based their operating model on exploiting employees in vulnerable positions, such as foreigners awaiting a decision on their residence permit application.

Their employees, it wrote, are forced to work in unfair conditions, paid for only a part of the hours they work, denied benefits for overtime and night shifts, forced to work extremely long hours with little or no breaks and holidays, and let go as soon as they enquire or complain about pay.

The manager of one service provider reportedly selected the employees based on the minutes of their asylum interviews and told them that he could use his ties to police and immigration authorities to obtain residence permits to employees who followed his orders and make sure those who did not were deported.

He had also made threats, used violence and behaved aggressively in front of his employees.

He and his partner are suspected of human trafficking, extortionate work discrimination, aggravated accounting offence and aggravated dishonesty by a debtor in a pre-trial investigation opened in 2018.

The service provider had won contracts for cleaning dozens of schools and kindergartens in, for instance, Espoo, Helsinki, Kerava and Tampere. Although authorities had determined that the company had repeatedly exploited its employees and the manager had been found guilty of working hours offence and unauthorised use of foreign labour, the City of Espoo did not terminate its contract for the last eight sites until July 2019.

The City of Vantaa last year awarded the company another contract for submitting the “most advantageous tender in overall financial terms”.

The story also details how the attempts of employees to call attention to the problem rarely led to actions from the police, supervising authorities or the procurers of cleaning services.

“The principal replied that unfortunately they can’t do anything because the acquisitions are decided by the City of Espoo. They told me I should study Finnish and get a better job,” reported one former employee who had described his and his colleagues’ working conditions to the principal of a school they had cleaned.

Complaints filed with the police, in turn, were typically met with the response that the issue is a wage dispute that falls under the purview of civil law.

Authorities may have also interpreted such measures as attempts to to delay removal from the country.

Service providers exploiting their employees have been able to remain in operation for extended periods of time effectively without any repercussions, as the powers of supervising authorities are limited.

Helsingin Sanomat said Regional State Administrative Agencies can issue penalty payments of a few thousand euros on employers for failure to pay their employees accordingly but not, for example, demand back payments on overdue wages. Employers can avoid the penalty payment by adjusting the pay in accordance with the terms and conditions of employment.

“The risk for employers is non-existent: it’s practically that going forward they may have to pay the wages they should’ve been paying from the start,” summed up Katja-Pia Jenu, a labour inspector at the Regional State Administrative Agency for Southern Finland.

The newspaper pointed out that the industry also has companies that treat their employees fairly.

Available also in Arabic, English and Sorani, the story has kindled widespread debate on social media.

Marin: Explotation can't be worth the risk

Prime Minister Sanna Marin (SDP) viewed that budget increases and legislative amendments are both required to rectify the situation.

“The situation in Finnish labour markets is completely unbearable when labour exploitation is so widespread and systematic,” she said. “The government wants to improve the position of people in vulnerable labour market positions. What’s needed are concrete improvements such as sufficient tools for supervisory authorities to tackle underpayments and other problems.”

“The exploitation of employees should come at such a high financial risk for employers that it isn’t worth it. That isn’t the case today. Also trade unions must be provided with more effective ways to tackle the problems. The right of action could be one measure.”

Annika Rönni-Sällinen, the chairperson of Service Union United (PAM), said she is not surprised about the findings, reminding that the tools forwarded in the story to eradicate underpayments and clarify procurement practices have been proposed by PAM and the Central Organisation of Finnish Trade Unions (SAK).

Ilkka Kaukoranta, the chief economist at SAK, called for the criminalisation of underpayments and an increase in the resources and powers of supervisory authorities.

Finland Chamber of Commerce will begin work to identify ways for businesses and public sector operators to make sure their sub-contractors act in accordance with laws.

“The described activities are illegal. This has nothing to do with local bargaining, for example. This is aggravating especially for businesses and associations. Trampling on labour laws and minimum employment terms is also unhealthy competition,” said Juho Romakkaniemi, the CEO of Finland Chamber of Commerce.